Mao Zedong, also known as Chairman Mao, is a famous historical figure, but controversial. He is revered in China by many, but there are those who want him to be held responsible for human rights abuses.
What does his hand tell us about this man, hailed as a hero? He was the founding father of the People's Republic of China (PRC), which he ruled from 1949 until his death in 1976.  No one can deny that he ruled with an iron hand but was Mao a great wise man as well, as some people firmly believe? 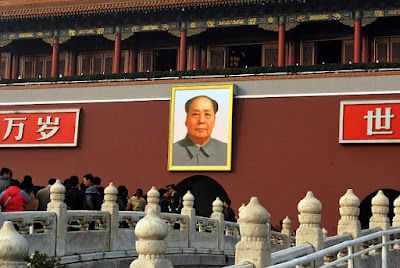 Mao's hand has a large palm, more rectangular than broad, and his fingers as compared to the palm are on the shorter side. The first phalanges of his fingers are not particularly long but the third phalanges are thick and long. The fingertips are mostly rounded but the Jupiter (index) fingertip is conic and the Mercury (little) fingertip is almost pointed. The Apollo (ring) finger dominates and is longer than normal, and the Jupiter finger is low-set although it is difficult to say whether it is shorter than normal.
You can check out his hand photos here, here, and here, and that of his left hand, here.
The lower part of his hand is also developed, particularly the Moon mount. The Mars mounts are either underdeveloped or developed slightly. The thumb is medium set, and a good length, and its second phalange dominates. The head and heart lines are a little curved and the heartline is considerably low-set. This creates a narrow space between these two major lines, although mostly underneath the Saturn (middle) and Apollo fingers. The head and lifelines are joint.
It is not surprising why Mao's reputation is so controversial. It is so because Mao was a complex man. Unpretentious, simple and seemingly self-effacing he was, but he was also the kind of man with a tendency to suppress his emotions and allow his head to rule.
His hand shows very good executive ability. Mao was a doer and this is a dominant feature of his personality. Fame and name mattered to him a lot, maybe to such an extent that he would take bold steps, maybe risks, to achieve it. This was the driving force of his personality.
Yes, idealism is shown on his hand but this is limited, and it was probably used to further his main aim, which was to garner renown. He had the power of words behind him as well, rhetoric – very clearly seen on his hands. However his thinking was not broad thinking, and in the middle years of his life, it was probably quite narrow thinking.
Mao's interest in being rich was absolutely zilch.
He had the penchant for being moody, solitary and very restless, inspirational and imaginative. His hand also reveals a certain coldness of temperament.
Mao wasn't an intellectual and there was a crude side to his personality. Also, ethics and/or morality was not high in his scheme of things. He probably considered these esoteric values, not practical; simply obstacles to getting things done. What this means is that he would likely go to extremes to get his way. There are fewer barriers for people with hands like this as instincts tend to rule. His hand shows limited self-control as well. As action-orientation is another major feature of his personality, he would take action without too much mulling over the consequences. The main thing would be to get the job done and the end justifies the means kind of attitude.
He was not overtly aggressive, however, and possibly not the kind who would get his hands dirty. His outwardly demure persona could have a way of disarming his enemies and also help him connect with the common people. Lack of pride and arrogance would have helped him get his work done.
Related Reading: Personality profiles as revealed by the hand of Li Keqiang and Wen Jiabao, the Chinese Premiers. Or Xi Jinping, the Chinese President. Or you can read the profiles of other famous people from China like actors and businesspeople.
Or find out what the hands tell you about Heads of State from all over the world.

Image by PublicDomainPictures from Pixabay