Saddam Hussein's hand – does it show that he was evil?

One assumes that the hands of men known for their evil deeds will show a hand with an evil personality. People do evil deeds but there is no hand which is evil per se. If one comes across a person who does bad things, the hands usually show a selfish, out-of-control personality, someone with a brute will and strong impulses. People are not usually heartless. They are just out of control. 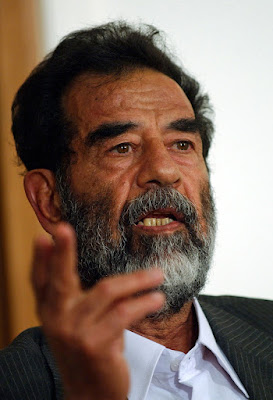 There are several hand readings of dictators on this website, and each of these characters tend to be different from each other although almost all of them have a base, primal side to their nature. What this means is that the instincts prevail and dominate and these people give in to these primal instincts. You will find such people in everyday life as well and they usually land up in prison if the country they live in is not lawless. If people of this type come to power, as they do in weak countries, they will destroy the very fabric of society, cloaking their criminal behaviour in either religious or political ideology.

Saddam’s Hussein’s hand shows the base of the hand developed, with heavy Moon and Venus mounts. The Lower Mars mount is developed as well, and the Apollo (ring) finger is long, too long. The thumb is of average length and possibly a little low-set with an average first phalange which bends backwards. The second phalange of the thumb is a little thick and quite long. The fingers are fairly straight with tapering, rounded ends. The Jupiter finger is quite low-set. There aren’t too many clear pictures of Saddam’s hand available on the net, however.

In Saddam’s Hussein’s case, there doesn’t appear to be a religious bent of mind. His hand in fact shows is a man who hungers for

fame and wealth – that is the predominant characteristic shown on his hand. Being extremely ambitious, very aggressive and self-indulgent can result in unstable behaviour although Saddam was in fact a quite a steady and logical thinker. Whatever he did was not because he was mentally unstable. He was the type who would go to any lengths to get what he wanted.

His hand also shows unreasonableness and difficulty in handling his emotions, and willpower is limited. As the instinctive drive prevails, his character is a potent mix of dangerous qualities. When such people are opposed, it brings out their worst side. People with these hand characteristics often have violent instincts. Plus, his hand shows an utter lack of pride. His conscience would allow him to do anything because the only thing he cared about was saving himself.

At the same time, his hand shows that he had a warm and loving side to his personality and was good to those whom he loved. He could also be a do-gooder if it suited him. Yet the world will always see him as evil because finally one is judged by one’s actions.

Related Reading: The hands of Dictators!
You might also like Nelson Mandela's hand reading or Muammar Gaddafi Hand Reading or Jacob Zuma's hand analysis or check out the hand readings of Heads of States from all over the world.
(The photo used in this post is a free photo from Pixabay)