Volodymyr Zelensky - an actor and a politician 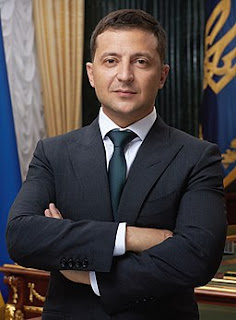 You might think that actors and comedians shouldn’t become politicians because they aren't suited for politics…but don’t be too sure. Actors have always dabbled in politics in many countries including America and India, and of course…Ukraine.

To say that actors make good politicians would be stretching it…but to say that some qualities that actors possess could make politicians very successful – that’s likely. For example, charisma and a desire for fame and name and of course…acting ability. Politicians wear a mask – they have to. It’s in the very nature of their job.

To be fair, Volodymyr Zelensky, Ukraine's President, is more than just an actor. His hand

shows a bold, extroverted personality, a superior ability to talk and articulate, warmth of nature, and yes, charisma in plenty. He loves attention, has a strong desire to be in the limelight but his hand also shows a pragmatic approach to life, and a broadminded one at that. But the best thing Zelensky‘s hand shows is balance of personality.

Volodymyr Zelensky has a broad palm with fingers that are balanced in length with the size of his palm. He has very clear, well etched lines with a significant gap between the beginning of his head and lifelines, long Apollo (ring) and Mercury (pinky) fingers, a low-set and bent Jupiter finger, and developed mounts of Venus, Moon and Jupiter. His thumb is a good length with a strong first phalange and a slim second. Overall, the phalanges of his fingers are balanced.

These hand features show a balanced, pragmatic person. His weakness is possibly his risk taking ability and this is accentuated in his hand, one of its most prominent features. Zelensky tends to take risks, or you can call them calculated chances, and often succeeds. His biggest challenge could well be knowing how far to go, when to stop. Being a little too optimistic of outcomes is very much a part and parcel of who is. That is what makes him at heart a happy, buoyant personality. Luckily, he has enough practical sense which can control and keep this trait in balance. He should however, listen more, listen to advice. So as long as he stays grounded and does not let his desires and wishful thinking interfere with good judgement, there is no limit to what he can achieve.

Zelensky’s emotions are in control, and aggression levels are moderate. He is something of a loner but his affections are steadfast and most importantly, Zelensky’s hand shows that he is a good man. He has some idealism in his personality and he cares about people.

Related Reading: The hands of Heads of State from all over the world.

Or specifically, you can check out the hand reading of Vladimir Putin, Russia's leader.