Vladimir Putin's hands give us a glimpse into his personality

Vladimir Putin, the Prime Minister of Russia who is now back as the President, and his personality is that of a man of action, and a quick thinker. His hands show a personality that is impatient, of a man who wants results, a man in a hurry. The only profession he is actually suited to is a managerial one, where he manages not just people, but events and changes. It is difficult to see this man's hand as a leader of people but that is what he is – Russia's leader!
According to his hand, he was perhaps the right man to oversee the massive changes that Russia went through as he took over the reins as the President of Russia in 1999, mainly because of his ability to get things done. He is the kind who will want to push things through come what may.

There has been some criticism about his methods, with many believing that he is fascist, and there are fears that he might go back to some of the old ways. Once we interpret his hands we can find out if this criticism is justified.Vladimir Putin has a broad palm, short fingers, the typical "square" shape of the hand. His hand is thick, due to the highly developed mounts, particularly the mounts of Moon, Venus and Jupiter. Although his fingers are short, his Mercury (little) finger is long, relatively speaking and so is the Apollo (ring) finger. The Jupiter (index) and Mercury fingers are conic-tipped, along with the thumb.
The thumb is not particularly long, and the second phalange is thick and that matches with the rest of the hand, with the lower part of it being quite thick. The top phalange of the thumb is also a little thick. His fingers overall are thick too. The heart and headlines though are well-balanced, and fine as compared to the thick, pink hand and are fairly long, although the headline is fainter at the end and goes deep into the Moon mount. The lines themselves are finely etched and the heartine is forked at the end. The quadrangle (the space between the heart and head lines) is a bit narrow. The hand seems stiff as well.
Check out a photo of his hand here and here.

These hand signs point to man who is a doer, a man with a good understanding of people, and of issues. He has warmth of personality as well and would be quite affectionate towards those he loves. However his hand also shows a coarseness in his nature and he would be someone who could roughshod over others. Diplomacy is definitely not in his nature and there is stubborn as well.
His hand shows that he has high ideals, and we can assume it these ideals have to do with a love for his country and its people. He is likely very patriotic, and certainly, his intention would be to see Russia become a leading nation. Although his hand does not show him to be evil or bad, it shows that he can be brutish if necessary. He is not the kind who would want to carry along his team. That is probably why he cannot be a true visionary or a true leader, but could have been if it weren't for some ingrained shortcomings. 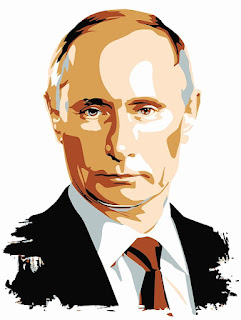 Weaknesses
His cautiousness and conservatism, even narrow-mindedness, when it comes to his ideas is a great weakness. Even though he wants to get things done, he is too excitable and volatile a man to think things through and he is likely to see things in a narrow way, through rose-tinted glasses. He can in fact go into his own imaginary world. His hand also shows a great deal of conservatism and the inability to change, and yes, inflexibility. He is not an independent or revolutionary thinker.

He is basically down to earth, but as he also has the above qualities, this may not be of much help. He can't help himself. Besides, he lacks diplomacy and can be unreasonable and stubborn. But his ability to think is limited as he finds it difficult to see another point of view.

If there is something good about him as a leader, it is because he probably has the interest of his country at heart, and genuinely cares for his people and can be compassionate and helpful. Besides, he can be quite shrewd and clever. He has a sharp, adroit mind, and is articulate and intellectual as well, despite his bluntness and crude approach and behaviour.

He may not seem aggressive overtly but is actually very pushy and very tough mentally.

His hand shows that he is not particularly a materialistic person but he does crave fame and name.

Restless he is, and also a bit of a loner. He has a very highly developed imagination however and this can lead him astray.
Overall his hand tells us that he cannot be considered a world leader.