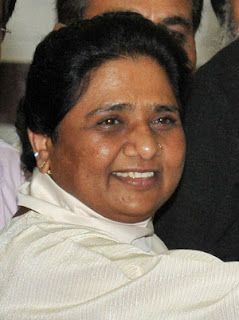 Mayawati's hands show her to be a woman who is street-smart but one who sees things from her own point of view, a person who could find it difficult to see the broad picture. Feelings are important to her, and she would tend to make decisions based on her feelings and would react rather than reason. Often, she could neglect to think things through or take into account the consequences. Diplomacy is not her forte.

She has a long hand, and the Jupiter (index) finger third phalange on her hand is well developed and the tip quite conic. The saturn (middle) finger is long and likely a little bent. The palm is on the narrower side, with developed mounts. The Mercury (little) finger is a little short and the heartline dominates. The thumb, though at good length is rather broad, possibly thick. The Lower Mars mount is developed, and the lifeline is very deeply etched. The first phalanges are a good length. Her lines are darkly etched overall. The Venus mount is not wide but it is high and the lower part of her hand seems quite developed, like Lower Moon and Lower Venus. Mayawati's thumb is long, but not excessively so and she holds her fingers close together.
The hand shows a tendency to react negatively. She could be somewhat of a wet blanket; a person who is quick to see the negative side of everything and that too, intensely. She has an imagination as well, and not always a healthy one. She doubts, and has feelings of jealousy and resentment towards others, readily believing the worst of them.
Check out her hand photograph here.

Mayawati's hand shows that she enjoys power and would likely to be quite direct when she goes about getting it. Subtlety is not what she is good at and in fact, there is a certain coarseness seen on her hand. While she is capable of controlling others, she can be manipulated as there is a certain simplicity in her character.
She does have some sort of belief system and ideals and scruples as well, but the desire to dominate is very strong. She can become mean when her desires are thwarted as she wants her way. Because of this, there is a tendency to bully, and she can be quite  tactless and boorish. She is not always reasonable either, especially when emotions are aroused.

Leadership qualities are present mainly because she is a dominating person, and quite determined and aggressive. Executive ability is present and she has energy and drive.

Although she is a smart woman and can think, she has a  conservative thought process. She is unlikely to do anything new or pathbreaking, not because she doesn't want to, but because she cannot. It is not that she is selfish, not at all. She has ideals, and wants to do good for her electorate. The problem is that she wants power a lot as well and she is not a risk-taker.

However, she could break the rules when it suits her personally. In personal interactions, she can be informal, and not conservative.

She also has a penchant for extravagance especially when it comes to her own pleasures. It's a basic crudeness perhaps. Status symbols matter a lot to her, to the extent that she can be extravagant. However, money by itself is not what she craves. It's the position and name and fame that she wants. The short-term vision and the difficulty in seeing the broader picture is a drawback for any person, let alone a leader.

(Kumari Mayawati is an Indian politician, the Chief Minister of Uttar Pradesh, one of India's northern states. She is unmarried, and is the first Dalit woman chief minister of an Indian state (province). She is looked up to by millions of India's Dalits who have been oppressed by the upper castes throughout India's history.)

Readings of some other chief ministers of Indian states: Akhilesh Yadav, Mamata Bannerjee or Yogi Adityanath.

Read more about the qualities of international and Indian political figures on this website by going through the tag Politicians.
(Free photo by the Ministry of Parliamentary Affairs (GODL-India), GODL-India