Mahatma Gandhi also had an issue with self-esteem. This could be another reason for his neglect of family. This is evident from
the shape and setting of his Jupiter Finger. This sign often shows humility, but not everyone who has this sign is humble; the humility in Gandhi is confirmed by a stronger sign - the shape of his thumb and its setting. His inner timidity also enhanced the humble nature. Check out a photograph of his hand here. 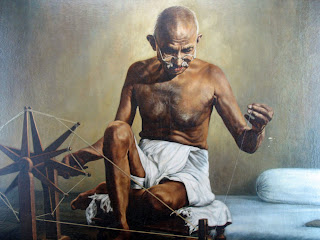 Two other well known aspects of his character are clearly etched on his hand. The shape of his fingers, particularly that of his phalanges, tells us that he was a disciplined man and that he had terrific self-control. They show a lack of interest in status symbols and money. They shows that his mind was always alert, curious and inquiring. Physical pleasures and other personal needs were not given importance. Gandhi did not care about hoarding money and had no interest in status symbols. He was not personally ambitious either, in the sense of wanting power.

However, the shape of Jupiter finger read in combination with the quadrangle and thumb, tells us that although he had no personal ambitions, he was a controlling man. He liked to have his way at all times and could be very stubborn. He found it difficult to see another point of view once his own mind was made up. However it is important to note that his idealism, impressionability and compassion and also objectivity (shown mostly by the thumb and also hand shape) made him receptive to people who were suffering and in need. This softened his stubbornness to some extent and vice versa. His hand shows that his stubbornness decreased as he grew older.

His long well-set thumb also shows determination, and a very strong will. Such people naturally rule. In addition his Mars Mounts tell us of his mental strength, quiet aggressiveness and resistance. The setting of his thumb shows his generosity and compassion and a deep desire to help others. His thumb is supple and conic, and this combined with the conic tips of Jupiter and Mercury, the flexibility of his fingers and their first phalanges, reveals his idealism and impressionability. This means that Mahatma Gandhi would never be blind to suffering. He would always be attracted to the ideal and would fight for it.

Every sign on Mahatma Gandhi’s hand points to the fact that he was a genuine spiritual leader. His lack of interest in worldly pleasures, in money, the lack of personal ambition, presence of strong idealism and his deep compassion for  human beings. His broad outlook on life as well as his strong will power and determination made him an effective leader.

Personally, he could have been a little difficult to get along with, but he was an intelligent man and this helped.

The lack of good photographs of his hands means that I have to stop here. It is known that Mahatma Gandhi believed in non-violence (Ahimsa) and I am sure this is evident on his hand but without a better hand photo I cannot comment on this aspect of his character.

Read about other Spiritual Leaders. Check out the hand analysis of Mother Theresa or a comparison of the modern spiritual leaders with the ancient or older ones.