From what I could discern from the hand of Shane Warne, his hand matches his reputation. His hand is that of a temperamental person. It is not easy to decipher cricketers’ hands as most of their photographs are with gloves on.

The best part about Warne’s hand is that his hand (thumb, hand shape) shows superior 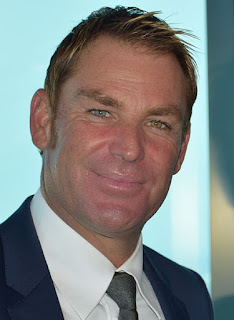 organizational and executive ability, common sense, and strength of will.
He has a largish hand, with a broad palm and fingers which are short, but not too short. A good, long, low-set thumb and fingers are mostly straight. The Mercury (little) finger though a little low-set is a good length and the mounts of Venus, Jupiter, Moon are developed, and even the Mercury mount is good. The Plain of Mars are Lower Mars are developed but not so much Upper Mars. He has a good, curving heartline and the Jupiter (index) finger is high-set.
Some of the above-mentioned signs show astute judgment where people are concerned. Moreover, it shows a person who loves people and gets along with them. A person who is compassionate and kind and would think of the interest of his team. Plus, he is aggressive and a go-getter. One would think that such a person would make an ideal captain of any team, but Warne has a weak side to his personality and that is probably what prevented him from reaching his potential in Australian cricket.

Check out his hand photo here and here.

He has a bit of a temper though, has an ego and can be quite excitable at times and at the same time he may not be able to withstand pressure that well.

This does not mean that Shane Warne's hands show him to be a person out of control, although he tends to be impulsive. He is in fact focussed and determined. He is not a victim of his feelings.

His hands show that he is a good man, loving and very caring.

Read about famous Indian cricketers: Rahul Dravid or Saurav Ganguly's hands reveal the secret of his success or Sachin Tendulkar's hands tell us who he is or about Sreeshanth's folly.
Or read about Pakistan's Imran Khan
Or check out all hand readings under the label of "Cricket" or the hand readings of other Sports Stars from other sports like tennis and football.
(Free Photo of Shane Warne from the wiky byTourism Victoria from Australia / CC BY [https://creativecommons.org/licenses/by/2.0])