The difference between Anna Hazare and Mahatma Gandhi

Anna Hazare, the social activist who has been in the news lately because of the Lokpal Bill, has been compared to Mahatma Gandhi. This post explains the similarities and the differences between the two men by comparing their hands.

The major characteristics of Hazare’s hand are his strong Mount of Moon, the deep and dark lines on his rather rectangular palm, development of the middle part of the hand, slightly short conic fingers accompanied by a long thumb. Mahatma Gandhi, on the other hand, has a squarer palm with a better balance of the Mounts, a larger hand and longer fingers, telling us that he is very different from Anna Hazare, although they share
some common traits. 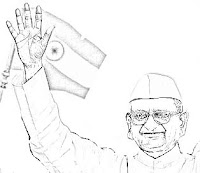 Idealism and impressionability are the qualities they share, but Mahatma Gandhi’s thumb shows formidable willpower, and a stubbornness to the point of unreasonableness, as well as strong mental resistance. Whether this was a great quality or not is not the question here. What this stubbornness did for Gandhi was that it helped him balance the impressionability and made him impervious to influence. He would stick to his guns no matter what.

On the other hand, Anna Hazare’s Moon mount is too strong and shows him to be a bit diffident and also something of a dreamer, with an inner timidity. Gandhi too was a dreamer (though to a lesser extent) and was a little timid as well (both have head and lifeliness joined and average Jupiter fingers) but Gandhi was less timid than Hazare is. Hazare’s humble persona is something he shares with Gandhi but Mahatma Gandhi was more humble (but less timid); humble to the point of lacking sufficient self-esteem. But Gandhi’s other qualities, like the stubborn will and strong mental resistance helped override his weakness.

Both Hazare and Gandhi's hands show the kind of aggression required to push through their agenda and both possess will power and leadership qualities (Lower Mars, Thumb). Anna Hazare‘s thumb phalanges are more balanced. This may seem like a strength because has the willingness to listen, and accept others’ point of view. A great quality by itself, but when combined with idealism, impressionability, and lack of mental resistance it can make a person weak. It makes him falter in the face of obstacles and it makes him vulnerable to the influence of others. In such a case the person would require the ability to stand his ground and also to evaluate people well. But Hazare has less of these qualities (weaker Mercury) as compared to Gandhi. He has also far less shrewdness and cunning than Gandhi had.

Anna Hazare is more of a doer than Gandhi ever was. Mahatma Gandhi was more of an intellectual. (Fingers, phalanges, Headline). Both are very capable and effective leaders of men, as seen by their Headlines and Thumb, but their ways are different. Hazare is more likely to actually do things, act quickly and achieve much. But to the credit of Gandhi, he had a broader perspective which enable him to see  issues as a whole and a better ability to judge their impact. Hazare would be dependent on others to show him the way.

Hazare's integrity and honesty (like Mahatma Gandhi’s) is high, but he can be used by others. His straightforwardness, ability to listen, humility and simplicity, timidity, idealism, lack of cunning and lack of resistance are his vulnerabilities. This may make him a fine man, as long as he is surrounded by good and sincere people.

Related Reading: Read about eminent personalities in India's history like Jawaharlal Nehru and Dr Sarvepalli Radhakrishnan or find out about what Mahatma Gandhi's hand says.


Or read about the difference between Indira Gandhi and Margaret Thatcher.

Here are the hand Readings of modern Indian Politicians:
Hand Analysis of Sonia Gandhi or Hand analysis of Lal Krishna Advani or Mamata Banerjee's hands tell us about her character or Do Narendra Modi's hands show his complicity in the Gujarat riots of 2002? or What P. Chidambaram's hands tell us about him or Prime Minister Manmohan Singh's personality characteristics or Mayawati's hands reveal her personality characteristics or The Hand Analysis of Nitin Gadkari, the BJP President or Nitish Kumar's Hand Reading or Kiran Bedi's hand analysis

Or check out the hand reading of  or other Spiritual Leaders

For read about other Indian Politicians and also international names by checking out all readings filed under the label "Politicians."