The sheer physicality of Hugh Jackman’s hand leaps out at you when you first see it. The large, slightly hard-looking hand, the squareness of it, the large broad fleshy palm, the deep lines, the wide and high Venus, the pink colour and balanced finger phalanges. These signs are a strong indication of an active, healthy, and energetic personality.
Jackman may not be an intellectual, but he has the power of
imagination, a creative bent of mind and higher-than-average intelligence. His hand is balanced, showing that his physical side is balanced out by the power of his heart and mind.

Check out a hand photo of his right hand here, and his left hand here and here. (He is left-handed). (The sketch below is made by me and the photo of Hugh Jackman published in this post is a free photograph.) 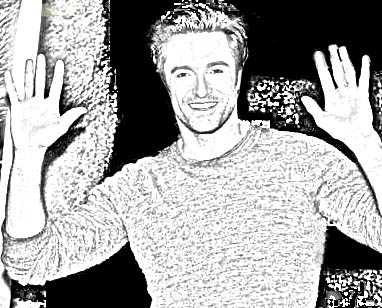 Hugh Jackman has a good thumb, supple with a conic tip. His fingers are medium-length on a broad palm, with conic tips and the Jupiter (index) finger has a pronounced conic tip. He appears to have sensitive pads on some of his fingertips. The phalanges of his fingers (the partitions on the inside of the fingers) are well-balanced with each other, which means they are not too long or too short. The lines on his hand are long, particularly his heartline, which sweeps upward in a curve to between his first two fingers and has branches. There is a line connecting his heartline to his headline. The Moon and Venus mounts are high, although the Venus mount is not wide.
His hand tells us of his above-average willpower, his impressionability and his idealism. Idealism will tend to colour all aspects of his life, making him seek meaning in the work he does and possibly in everything he does. This, in fact, is who he is and his driving force is not money or power.

He has a deep capacity to love, and there is little doubt that his heart dominates his persona. At the same time, his hand shows that he is not the kind to have unrealistic expectations of his partner. He is down-to-earth in that sense and will be accepting of who she is. This personality trait is usually critical to a happy marriage. This is a trait missing in say, Tiger Woods, who is known to have been unfaithful to his wife. But Jackman can never be that. He believes in the idea of long-lasting love. For him, it will always be less of an emphasis on the physical aspect of it and more on the idealistic and mental aspects. This is despite his hand showing high passion. Jackman is very sentimental and emotional, far more than the average person, 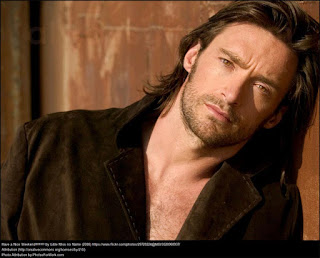 Even on screen, he manages to project a sexy persona...this he has, sex appeal in real life as well.
Hugh is impressionable, with a love of beauty, but with his high-mindedness and beliefs, will likely remain a faithful partner to whoever he commits to.

Jackman is not what he appears to be in more ways than one. He is aggressive, but this high aggression should ideally be matched by resistance as it makes a person's aggression more effective.
At heart, he is a vulnerable soul. He tends to be a little dreamy and idealistic sure, but what is more significant is that he cannot stand up to adversity that well. He is the kind of man who will bluster and bluff and then back down if pushed hard. He is the kind of person who will prefer a strong partner whom he can lean on and get support from. This is true especially as objective thinking or thinking purely with his head is not who he is.

Related Reading: Insightful characterisations of famous Hollywood actors like Tom Hardy, Tom Cruise, Ben Affleck, Johnny Depp, Leonardo DiCaprio, Julia Roberts, or an actor of yesteryear: Marlon Brando. And there are many more such hand readings of actors and actresses: Try the label Hollywood!
There are also many hand readings of Bollywood actors on this palmistry blog.