Mahendra Singh Dhoni is known for being a cool and cunning customer and a strategist. How many of these personality traits are corroborated by his hand? What is Dhoni really like? Well, his hand does not show him to be a master strategist, but more of a person with strong instincts and a feel for the game.

And is Dhoni really as calm as he looks? What does his hand say? 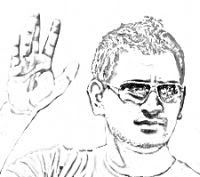 Well, his hand tells us that he is not as calm as he appears to be!

His hand is a unique combination of characteristics. The short fingers tapering at the end, the long first and second phalanges which are also slim, the broad wide palm, the balance between his head and heart lines, the long but slightly thick thumb, the strong Mount of Moon, long second phalanges, good but low-set Mercury finger, and the averagely developed Upper Mars all tell a story. They tell us of a highly talented man, a man with tremendous mental and physical skills who wants to take his talent to the highest level.
Several of the fingers, though slim, are curved and the heart and headlines too are long and curved.
Check out a hand photograph of his here and here.

There are some people who crave to be the best, want to do something perfectly, and be very very good at it. And they want the world to know it and laud it. Dhoni is one of them. He sets high standards for himself and for others. This can result in obsessiveness which can become a pain for others especially as Dhoni is stubborn and not always diplomatic and reasonable.

He strongly desires fame and wants to be known for his skill and talent, not for the money he has. This can give rise to feelings of jealousy of those more talented than him because Dhoni has feelings of insecurity. Money does not figure prominently in Dhoni’s scheme of things.

Dhoni is a fairly good planner, but not supreme in this arena. He does have strategic thinking skills but it is his creativity and imagination which give him a strong intuitive feel for the game and help him make the right decisions. He is also shrewd and understands people, and yes, he can be a cunning strategist, but is not a master manipulator as such in the true sense of the term.
His plus points are that he is serious, focused, extremely ambitious with a drive to be in the limelight, intuitive, understands people, and has good thinking ability. He can see issues objectively, and his emotions are well in control. This helps him make the right decisions. His negative points are that he can get too critical of others and is at times insecure, cynical and can become vindictive.

His hand shows business ability and there could also be musical talent in his personality or at least a love for music.

His wife can rest assured that he will be a loyal husband, if a little distant. He does not see marriage through rose-tinted glasses and is accepting and understanding. As long as she is the most important person in his life she has nothing to worry about.

Dhoni is not as cool inside as he appears outside. This does not mean that he has feelings of anger buried deep inside. It means that he is vulnerable inside because of he is imaginative and a little moody. There is also some lack of strong resistance to adversity. During the bad times, he can think the worst of himself, worse than he actually is, because he is very critical of himself. He needs a strong partner who will give him the mental strength to get through the hard times.

Related Reading: Sachin Tendulkar's hands tell us who he is or Saurav Ganguly's hands reveal the secret of his success or Shane Warne's hands match his reputation! or Rahul Dravid's hand reading or Virat Kohli.