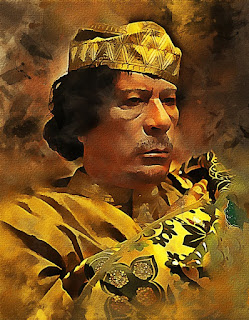 His hand is one of the most powerful ones I have seen, showing a forceful personality. His developed mounts of Jupiter, Venus, and Mars, deep well-cut lines, strong, curved and high-set Jupiter (index finger) and strong thumb, a low-set, and the Mount of Mercury is well developed, as is the little finger. His headline is long, and slightly sloping. All this shows immense physical and mental energy and a clear purpose in life. He has a broad palm and slightly short fingers. As odd as it may sound, his purpose is not primarily a selfish one. Sure, he craves power, and it is his driving force, but it's important to remember that he has a humanitarian side to him. He has a mission, and a purpose in his leadership.

His headline and fateline show his persistence, perseverance and concentrative ability. His thumb shows his reasoning ability and diplomacy. His head is always in the lead, despite a deep heartline. This, in addition to his pragmatism, enables him to make hard, even ruthless decisions.

Check out one of his hand photographs here.

His hand shows mental as well as physical agility. He is also fairly intuitive, and very clever indeed when it comes to handling people. His shrewdness, persuasiveness and manipulative ability is the strongest aspect of his character. He can put on an act easily, and fool people.

However, despite these qualities, Gaddafi cannot be considered intelligent in the true sense of the word. His hand is too fleshy and his fingers too thick to give him true clarity of thinking. Also, there is a love of physical comforts and an overpowering desire to lord it, be in the limelight, and control others.

His hand shows aggressiveness, at times quite excessive, and mental resistance as well. Perhaps this trait, and the development of the lower part of his hand, gives us an inkling about the streak of violence in his character. He is not discouraged easily, he is a fighter. Mental strength by itself is a good character trait, but for someone like Gaddafi who likes power, it is usually counter-productive. If Gaddafi’s schemes fall flat (he is a perennial schemer and planner) he is the kind who will dig his heels in. He is stubborn as well and wilful. Arrogance and vanity are also shown on his hand.

In a nutshell, Gaddafi is a smart man with some good ideas and compassion for others, but he is not a strategist and thinker. Besides, he is loath to take advice from others. and likes power too much. Perhaps if he had been born and nurtured in a country with democratic traditions, his inherent despotic and aggressive nature could have softened and he could have made a decent leader. 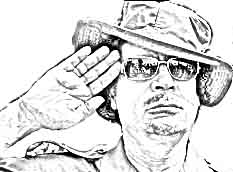 Or read about the Heads of State of different countries around the world.
(The sketch of Gaddafi has been made by me on photoshop and the colour image is a free one by azazelok from Pixabay)