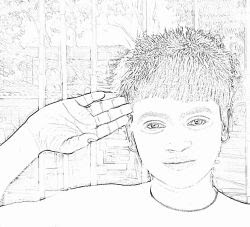 The little boy in the sketch is not famous and never will be, in stark contrast to those who have found a place on this blog because of their celebrity status. This boy has little chance of becoming famous because he was born in poverty, and without inherited wealth, with no access to education or the caring environment of a family who could nurture his hidden talents and help him control his weaknesses, his life is probably doomed from the start.

He was on the streets, begging. Either his parents pushed him into it or he is an orphan – just one kid amongst thousands of street urchins, and reading his hand does not mean that the others on the street are like him.

This boy has one of the saddest hands I've seen. His right hand tells us what his character is likely to be when he becomes an adult, based on his status and circumstances today. Sure, he could change, although
it’s unlikely that Danny Boyle will discover him to change his life.

The main characteristics of his hand are his short fingers with developed/thick phalanges. The little finger is shorter than normal and slightly bent, but the Apollo (ring) finger is strong, and the Jupiter (index) finger is curved and also a little short. He also has a supple but good-sized thumb with a short plump first phalange and a thick second phalange. The mount of Venus is thick and wide. The boy has few lines, but the main lines are dark, and thick. The heartline is long and curved, ending on the Mount of Saturn, a no so common beginning for a heartline. The headline is high-set and does not have a smooth path. The lifeline is drawn towards the mount of Moon and is wavy.

Each of these signs by themselves do not signify anything awful, but in combination, these markings are not good.

The boy's hand reveals him to be a restless and impulsive person with a strong sexual appetite and limited willpower, with below average intelligence and a lack of reasoning powers. It shows a person who equates the idea of love with sex and other pleasures of the flesh. He likes his physical comforts, enjoys luxury and hankers for money and attention and he wants to make it big in some way. On a superficial level his personality would be attractive – pleasant, fun-loving and carefree. Perhaps that was why he saluted me when I fished out my camera. He posed for the picture, a hint of a smile on his dry lips.

He is stubborn and attempts manipulation but falls short due to his limited understanding of other people’s motives and lands up being the sucker. He can be naïve and cunning at the same time and finds it difficult to comprehend logical reasoning although he is not stupid. He has an ability and skill of some kind. As he has a creative side to his personality and a risk-taking attitude, he could make money as a small-time street entrepreneur but he will not be straightforward.
Overall, this picture of his personality is not good and could this is a boy turn out to be a petty criminal?

But as mentioned in this blog, the future as told by hand reading is inexact because lines can change and behaviour cannot be predicted. This boy's future, the way he is today, does not look good because his physical needs are very strong and his desire for success is out of proportion to his abilities. He will likely to live on the edge. Add to this fact that he is stubborn and unreasonable, which will make family life difficult as well.

His career/work should be okay, in the sense that he is a survivor but he could be conned too. That is why the chance of him landing up in jail is high. He could be used by smarter criminals. He craves for security and stability as well, but this is not what he will get. His good health in his youth could enable him to survive the rough life. His hand also shows some aggression. What is termed as "aggression" varies a great deal depending on one's circumstance. In the milieu that he moves in, he will be considered aggressive.

Long-term success is not seen in his hand. Greed being a strong factor with him means that he could be short-sighted. For him, a bird in hand is worth far more than two in the bush. And there is not too much self-control.

(The sketch of the boy has been made on Photoshop from photographs I took of a street urchin in Mumbai last month)
Related Reading: The hands of a handcuffed man... or the hand reading of a terrorist or