The Hand Reading of a Terrorist

This is the hand of a known terrorist.

Is he a typical specimen of his ilk? Probably. Was I surprised to see the type of person his hand revealed him to be? Of course not. It is a hand often seen on criminals, the brute kind. Reading this hand confirmed what I (and I'm sure many others) believe - these mass murderers of innocents are not driven by religious ideals; they are not religious fanatics or religious extremists. They are not religious at all because they are driven by hatred, revenge, anger and greed, either for power or material gain. Driven as they are by these dark, and at times evil motives, they cannot be people of God but inspired by the Devil. 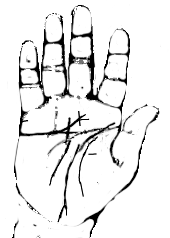 The main features of this hand are the excessively developed mounts, particularly the mount of Moon, short thick fingers with the lower phalanges heavily developed and an average thumb which is conic at the tip with a very thick second phalange.

Worse is to come...the finger of Jupiter is not just short, it is also low-set, bent, with a short first phalange (if compared to the other first phalanges) and with a distinctively conic tip. And the Apollo finger is too long and the Headline is weaker (in this case less well-etched) than the other lines, There also appears to be a line connecting the head and heart lines although this last was not very clear from the photographs.

Each of these signs tells a story and not a flattering one. If these signs are taken separately they do not indicate anything alarming because they point to weaknesses that can be balanced out by the strengths of personality shown elsewhere. Unfortunately, in this case, the combination of signs do not paint a pretty picture.

To sum up, this hand belongs to someone who is weak and unwilling to see reason. By weak, it means someone who will sell out his closest aides to protect himself and that makes him a poor leader - of anything. This hand belongs to someone who cares about public opinion and wants fame and name and would be willing to take risks to get it but at the same time is likely to stoop to doing something shady - as long as he is never found out. It is people’s opinion which matters, not his own opinion of himself, which in any case is poor. It is all about low self-esteem, lack of self-pride, and cowardice. In combination with greed, lack of reasoning powers, and high ambition, the result can never be good.

Aggression and short temper are present but this person is a mouse in his heart, inwardly frightened to come face to face with trouble and disapproval. Such a man will not hesitate to commit a crime if he feels he has the backing and support. He will hide behind someone else. Status symbols and a good life matter to him. He will not like to live a simple life.

Surely there are some good aspects to this terrorist's character? What about religious idealism? Idealism is seen on the hand, but not religious idealism. It is more a kind of stubborn righteousness which this person likes to push with brute force. A certain level of intelligence is shown as well as a reading habit. He is also quite articulate, able to use words in a clever way.

There are similarities to other famous murderers, although the individual differences make each unique. This terrorist lacks the ideals found on the hand of Hitler! Yes, even Hitler had a strong belief system! This just confirms to me that terrorists are a lot like the worst mass murderers of history, if not worse.