The hands of a handcuffed man...


There are hundreds of hand readings of famous people on this site and a few on palmistry as well. Some of the hand analyses are of notorious people like that of the serial killer Ted Bundy or this unnamed terrorist. Criminals hands make a fascinating study although the hands cannot show whether a person will commit a crime in the future or even whether has done so in the past. The hand shows personality characteristics, not actual actions.

But one cannot discount the fact that the hand shows up weaknesses of personality,  giving us hints about a person’s actions, criminal or not.

Prints of criminals are not available freely and a quick of check of some hand-cuffed people on the internet was disappointing. A lot of these are “stock” photos so we cannot confirm that they belong to criminals. Even if genuine, some handcuffed people could have been handcuffed for minor reasons. Despite these reservations, after studying a few of these photos, my conclusions are that many of these hands aren’t “good” in the normal sense. They do not have the best lines. One of these hands stood out and this is the hand being analysed here. It belongs to an unknown handcuffed man. Whether or not he has committed a crime I cannot say, but his hand shows the proclivity.

These hands were selected as both the right and left hands have poor lines and therefore we can disregard (for the sake of study) the differences between the person’s active and passive hands.
There is also the possibility that the lines being studied are not fully shown in the image. One has to take that chance for the purpose of this study.

The photo was turned into a sketch (so as to minimize copyright violation) and is published below. It was rotated 180º; that’s why the right hand is on the left of the image. This is the link to the actual image. 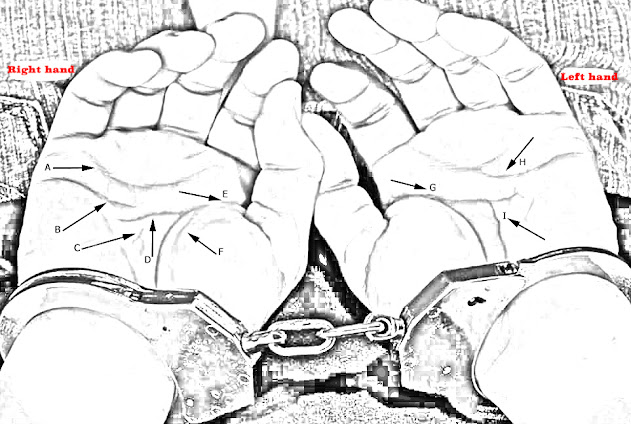 On the right hand, there is a curved line (A) probably the Girdle of Venus. The heartline is considerably displaced (B), sloping down towards the headline. Such displacement diminishes the strength of the heartline. As there is a Girdle present, this lays more emphasis on sentiment in the personality, rather than deep heart qualities.

The headline is (D) wavy, slopes, and is excessively tied (E) to the lifeline. A wavy, sloping headline shows changeability but the characteristics shown by this sign can be redeemed somewhat if other lines are good. It's not so in this case. Similarly, a Girdle of Venus is not necessarily a bad sign and it can, in fact, can add positive qualities but only if the other lines are stable.

As the headline is so tied up with the lifeline, it forms a distinct acute angle, showing psychological dependence and a high level of introversion. It is possible to get over this as a person grows older but unfortunately, the owner of this hand may suffer the ill effects of this for longer. For one thing, a high level of sentimentalism, sensitivity and imagination is shown and this would make the subject react emotionally and in a hypersensitive/dramatic way to ordinary situations. This is not a good bent of mind for introverted people. Often, such people live in their own world and without a stabilizing influence in their lives, are vulnerable to being influenced negatively.

There is an influence line on the Venus mount, which means that the subject probably has family, so there was hope for him.

Unfortunately, the fateline is short and barely visible on the right hand. A short or missing fateline does not necessarily show failure but it can show a lack of direction, particularly when takes into account the shape of the head and heart lines. This increases the chances of the subject being influenced by others.

If one had to outline the personality traits shown by this hand one could say that he is an extremely introverted person given to high sentimentalism and someone who could be easily led. Consistent and focussed thinking and common sense would be lacking and impulse control low. He would be vulnerable to outside influences which could lead him to crime.

Related Reading: The hand of an unfortunate street urchin; The Hand Reading of a Terrorist; Adolf Hitler's hand reading
Posted by Nita at 11:10 AM