If there was a single personality characteristic that one had to pick as a reason for Tom Cruise’s success, a quality without which he would never have made it, then it would be charisma. That is what his hands show. He has charisma and this gives him a persona that can charm, persuade and hypnotize. Several signs on his hand like the heavily developed Venus, the strong Moon mount, the position of the Head and Heart lines and the open thumb point towards this reading. The gap between his Head and Lifelines is ideal as well: not too much, not too little. This shows that Tom has
the boldness and the confidence necessary for an actor to perform without being self-conscious. Qualities which are underlined by the position of Tom's thumb. Check out a hand photo here. The picture below is a free photograph. 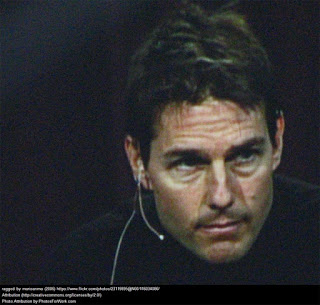 Other major signs on Tom's hand are his broad palm, fingers which are on the shorter side with square tips and the Mercury and Jupiter mounts fairly well developed. These and other signs tell us that this is a good guy! A person with a warm heart and a friendly nature, as well as a broad-minded and understanding attitude.

The Headline and Jupiter mount tell us that Tom began his life in a very ambitious mode with a strong desire to accumulate wealth and fame, but as early as 30 his thoughts started to change and materialism started to take a back seat. Before he was forty, the materialism was almost gone. Such major changes in thinking in the span of a few years do not show emotional stability. Indeed, Tom can be moody and excitable.

He is also the kind who needs emotional support. If one compares the mounts of his hand, Mars is relatively less developed. He could only be truly happy with someone who is available, and emotionally connected to him. Someone who is encouraging and supportive at all times because of an inherent weakness of character (Headline and Mars combined effect plus Moon mount). Nicole Kidman could not have made him happy as she would have been emotionally distant and not available to him at all times.

When it comes to talent, Tom's Apollo finger, Headline and Moon Mount show creativity and skill. He certainly is talented, although not extremely so. It would be mainly his personality and charisma (and of course his looks) which have got him where he is. Talent, looks, plus an outgoing and friendly personality are a great combination.

A lot has been said about Tom's affiliation to Scientology, but his hand does not show religious extremism. What his hands show is idealism, and a strong belief in something (Jupiter finger) but it does not show blind belief which is to my mind what extremism is all about. Perhaps because Tom is moody and tends to wear his heart on his sleeve, people misunderstand him. Besides, his warm and affectionate nature would predispose him to expose his vulnerable side.

Sure, Tom has negative traits. There is a streak of stubbornness in his personality and he can be very controlling and manipulative when he wants something. This combined with his moodiness would not make him an easy man to live with. However, his good qualities could well overshadow these personality traits. If you want the same thing as Tom, he can be a very nice guy!

(Tom Cruise is a Hollywood star)

Read about his ex-wife Nicole Kidman. Also about other internationally famous actors like Hugh Jackman's hand reading or Johnny Depp's hand analysis or Does Charlie Sheen have an addictive personality? Or Ben Affleck's Hand Reading or Ashton Kutcher or Denzel Washington and Julia Roberts. Or whether Mel Gibson and Russel Crowe angry people?
Or check out hand readings of other Hollywood personalities.