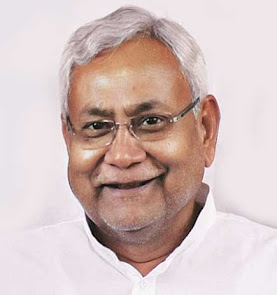 Nitish Kumar’s hand (currently Chief Minister of Bihar) is one of the better hands among Indian politicians. Hand Reading did not reveal any serious flaw in the personality of Nitish Kumar. He is certainly more than worthy of the chair he holds…and more.

His hands are on the larger side with an even length and long fingers slightly tapering at the end, and the palm is
fairly broad although it is rectangular in shape. The fingers are curved and the Saturn (middle) finger is long and all the fingers are conic-tipped.The Jupiter and Venus mounts are developed. Both the heart and head lines are curved and there is a gap between the head and lifelines. The headline starts at the base of the Jupiter mount or perhaps on it.
These signs show a person with a cool head and a balanced personality, some wise and serious. The excellent thumb (long, and well-shaped) is another great asset of this man, showing strong willpower, focus, and leadership qualities. The thumb tip and the balance of the phalanges show executive ability and the strong presence of reason and judgment.

(Check out a photo of his hand here).

What a balance of personality means is that such a person does not go to extremes in his desires. Such a person will not crave or want something so much that he will be willing to compromise. Or he will not want something which he knows he does not deserve. This attitude usually makes the person make the right decisions.
Nitish Kumar’s hand does show that he is very ambitious, and he enjoys money too (although more so in the first half of his life) but he does not crave for the limelight, power or money. This means that at all times he will exercise good judgment and will not be blinded by personal greed or gain.

His hand also shows an innate seriousness of personality. Such people achieve much due to their focus and ambition. He is likely to be superstitious and possibly religious.

He has strong ideals and beliefs, but not so strong that it distorts his perception of reality. Although he is shrewd and cunning and can be manipulative, he is not a selfish man. He is in fact a compassionate man.

His hand shows idealism and a love for beautiful things as well as an artistic sensibility. His hands show that he is more refined than many famous people whose hands I have read on this website.

He may not be great at execution because of his impressionability and the fact that he can be pushed and convinced. Bold as he is, he is likely to back down if it came to the crunch and this means that it will always be a struggle for him to achieve anything significant.
He tends to use some fanciful words at times, but his power of expression is an asset to him.

So yes, Nitish Kumar has his weaknesses but he is a good man. One wonders however whether he is suitable for politics. He is certainly not suited to play an important role on the national stage.

(Nitish Kumar is an Indian politician currently serving as Chief Minister of Bihar, a state in Northern India)

You might also like to read character sketches of some past Presidents and Prime Ministers of India like Pranab Mukherjee; Manmohan Singh; Rajiv Gandhi; Pratibha Patil and more!
There are hand readings of many other Indian politicians and those from all over the world. Just check out the label Politicians.
Photo credit: Government of Bihar, India, GODL-India