Does Charlie Sheen have an addictive personality?

Some personality characteristics have been associated with substance abusers, many of which (experts say) are inherited. I thought it would be interesting to see if Charlie Sheen’s hands showed any of these characteristics and whether they were inherited. According to research, these are some of the personality traits
often associated with addicts. 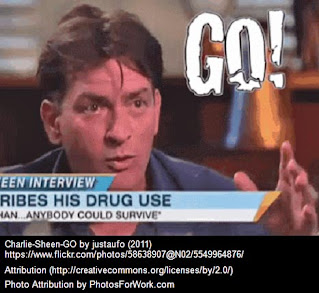 Charlie’s hands show significant differences between his left (click here for picture) and right (click here for picture) hands and this tells us that he changed, and unfortunately, not all is good. One significant change in Charlie Sheen’s hand is in his headline. The headline on his left passive hand (the passive hand tells us of the inherited or subconscious qualities) is unbroken and fairly level, and the one on the right active hand is broken. Broken headlines are not by themselves bad, but the manner of the break matters.
The first phalange of the thumb on both hands is too long, and the head and lifelines are joined together too. The Apollo (ring) finger is prominent. The Moon mount is heavily developed and the fingers are not straight.
His hand shows stubbornness and a wilful nature. He is also aggressive and pushy and he lacks finesse. He can be quite crude and blunt and he must have always been like this. The way he is today, his hands do not show logical thinking so the above two characteristics would make him do things that would harm his own interests. Mental clarity and common sense is not shown on his hand today.
When it comes to the characteristics of an addictive personality, some extreme cautiousness and inner shyness can be seen. Moodiness and a brooding nature is shown on his hands.
When it comes to “sensation seeking, or wanting to try new experiences”, Charlie Sheen’s hands do not show this particular quality, but they do show that he likes to be in the limelight. He wants fame, and he wants to be noticed. This trait is seen in many famous people's hands but it needs to be tempered with common sense. With the right type of will, this desire can be channelled into something productive, but this was not so in Charlie’s case.

When it comes to “impulsiveness,” Charlie Sheen’s hands do not show excessive impulsiveness or even an excessive go. His waterloo was faulty thinking. In fact, his hands show him to be a master manipulator! He plots, and often what may across as “impulsive” could well be planned for some grandiose plan that he has in mind but it may not be logical.

The “disinhibition (poor control over behaviour)” is present. And he has the stubbornness to push through with the wrong actions.

His hand certainly shows “Negative emotions” which can come under moodiness. This part of his personality is inherited. Emotions of melancholy are not a good combination with a latent inner diffidence (left over from childhood.)

And yes, as Sheen is more than averagely aggressive, he can rub people the wrong way.

In conclusion, one can say that while Charlie Sheen’s hands show some of the traits of an addictive personality, the most harmful traits are his difficulty with logical reasoning and also his stubborn will. Neither of these traits is inherited. There was something in his upbringing which made him like this.

(Charlie Sheen, is an American film and television actor,  He is the youngest son of actor Martin Sheen who is of mixed Spanish (father) and Irish (mother) parentage.)

More personality readings of TV actors like Jennifer Aniston from Friends; Jensen Ackles and Jared Padalecki from the television series Supernatural; Ashton Kutcher from the 70's Show; Wentworth Miller from Prison Break.
Or check out the hand readings of other famous actors and celebrities from Hollywood.