Although there are plenty of photos of Kutcher on the net, unfortunately, there are few which show his hands clearly. However, some broad personality characteristics can be seen from his hand.

You can check out some photos of his hand, here, here and here. The photo below is a free photograph. 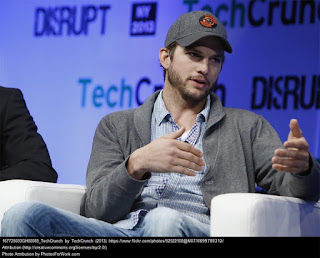 Let’s start with what he is believed to be like. Kutcher tends to shoot off his mouth, has an attitude (at least some of the time), and he also tends to be a little over the top, dramatic.  He is fond of technology, has made some good investments, and is involved in philanthropy. That is what is generally known about him.

Does his hand bear it out? Yes and No.

His hand shows that his attitude is just a front, a part of his dramatic persona, his way of trying to draw attention to himself. At heart, he is a humble guy.

Dramatic he certainly is, as seen from his Apollo finger, and the gap between his head and heart lines. It is not surprising that he became an actor, although apparently, he has said he doesn’t really like acting that much and is not a good actor. Well, his hand doesn’t show acting talent of any real depth, not really. It does show a kind of flamboyance, a bold personality, and a desire for fame and name, and these characteristics usually fit an actor. It is half the battle won. Going out there on stage, facing people, talking your mouth off, networking, well, he would be good at that.

At heart, Kutcher is a very sweet, loving and helpful guy. Very clear from his Heartline. He has a heart that would go out to help others, even if they are not his near and dear ones. One problem though. His Headline is not very strong, not that deeply etched or long. No, this doesn’t mean he is less intelligent. In fact, his Headline shows intelligence, but people like him are not leaders, and this can mean in relationships too. He is the kind of man who needs a strong woman. Perhaps that explains his attachment to Demi Moore earlier in life.

Related Reading: Tom Cruise's hand reading or Ben Affleck's Hand Reading or Hugh Jackman's hand reading or read about Mel Gibson and Russel Crowe or Denzel Washington and Julia Roberts or Johnny Depp.
Or find out about other Hollywood  personalities, both men and women.

https://palmistryforyou.com/2019/11/the-hands-of-joaquin-phoenix-joker.html
Posted by Nita at 7:58 AM