Wentworth Miller’s hand is one of the good ones when one compares it to the hands of other celebrities and successful people  It shows a calm and inwardly strong temperament. And it shows a very good heart as well.

Wentworth has claimed that he tried to kill himself when he was 15 (because of some issues regarding his sexual orientation) but when one looks for the signs of a suicidal person, 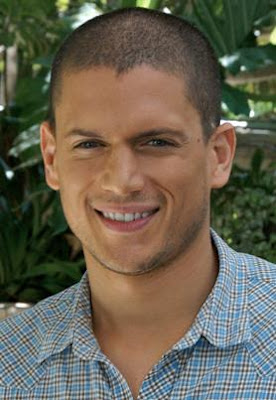 one cannot find them on Miller’s hand. This just goes to show that people who try to kill themselves are not necessarily “suicidal” by nature. By this I mean they need not be people who are unstable or chronically depressed.

In Miller’s case, it is just the opposite. He is a cool customer. This is not just on the surface. He has inner strength.

Miller has a large hand with a large palm and long, slim fingers with a long Apollo (ring) finger, and a thumb which is of a good length, with a strong upper phalange. He has developed Moon and Venus mounts, and a slightly hollow palm. The lines on his hand are well-etched and the heartline is long and ends in a fork. The headline is sloping and is a little weak as well, but the shape of his hand is more important.

No doubt that Wentworth Miller’s heartline is better than his headline, and his emotions can get the better of him at times, but this does not mean that he is an emotional out-of-control person. On the contrary, his hand shows an extraordinary coolness of temperament and mental strength, despite his sensitivity. The only issue is that he is not steady in his thinking; his thinking changes several times in his life. And this is concerning major issues. These changes would affect his emotional health.

As it is he is the introspective type. His heightened sensitivity to the environment will likely affect his emotional state because he would find it difficult to function in a hostile or unpleasant environment. He can be called thin-skinned if there is such a term. But this does not mean he cannot handle it. He is very determined.

Miller's hand shows remarkable business talent, a kind of understanding of what works in the marketplace, and this is more enhanced than the acting talent although he has creative talent. What's more, he is the kind who strives to improve himself. And from what little one can see of Wentworth Miller’s lines, this man is in for some very serious long-term success. This success is likely to stem from his business acumen. He can take risks, calculated, intelligent risks.

He is not the materialistic type. He is just very smart. Carefully weighs the pros and cons. Takes time to come to decisions, and finally does exactly what he wants.

You might also like to read about other television actors like Does Charlie Sheen have an addictive personality? or The hand reading of Miley Cyrus or  What Jennifer Aniston's hands show about her personality and temperament

Or check out the hand readings of other actors from all over the world or just Hollywood celebs.
(Photo credits: Free photo by Andrew Horovitz / CC BY-SA [https://creativecommons.org/licenses/by-sa/2.0])