Most Hollywood stars marry once or twice, if not thrice. However, Leonardo DiCaprio is a known player. He doesn't seem to want to marry. What makes him different from his famous colleagues in Hollywood? Reading his hand was the nearest I could get to for an answer.

The dominant mount on Leonardo’s hand is the Moon Mount, and that imbues the owner with a certain amount of self-centeredness, restlessness, and
moodiness. There is also an enjoyment of solitude, sensitivity (enhanced by the sensitive tips on the fingertips) and at times an imagination that can border on the morbid. Check out a hand photo of Leonardo Dicaprio's here.

Many people with a dominant Moon mount do marry, however, even if they do not make the best partners; often remaining kind of 'autonomous'. Very successful people, on the other hand, are unlikely to succumb to societal pressures when it comes to their personal life.

There are other reasons why Leonardo could be a commitment-phobe. Leo's 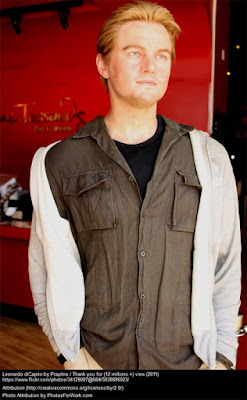 Headline and fingers show that he is a practical man, but his Heartline shows that he tends to be sensual and sexual rather than romantic and idealistic when it comes to his loved one. Such people usually do not have a huge problem moving on in relationships.

Other features of his hand are a fleshy palm with slightly thick and bent fingers and developed lower phalanges, particularly that of Apollo and Saturn. All this shows the love of luxury, attachment to status symbols and the good life. It also shows that he can be surprisingly mean.

This does not mean that Leonardo Dicaprio is mentally cold, because even though his Venus Mount is not heavily developed, it is normal. His Heartline does not suggest coldness, although manipulative and at times mean behaviour is possible (shown elsewhere on the hand). Mars would give him sufficient fire of temperament, although this is different from sexual passion.

The development of the Upper Moon Mount is only positive, revealing extraordinary ability. His pragmatism, common sense and willpower (seen from the Headline, fingertips and thumb), all adds to the success quotient, as does his manipulative ability. The sensitiveness which tends to makes him hyper-aware of his surroundings and the vivid imagination would be an asset in the profession he is in.

Although he has a materialistic outlook, philanthropy is shown on his hand (mainly from the thumb setting). This points to a good human being, despite his known fickleness when it comes to love. And perhaps one day Leonardo’s pragmatism could make him commit. He would be happy with someone as autonomous as him, someone not demanding, and someone who will give him plenty of creative space.

(Leonardo DiCaprio is a well known Hollywood actor. Although American, his ethnicity is half German, part Italian and part Russian)