The Hand Analysis of Bill Gates

As you all know Bill Gates is not your average Joe. He was not born that way either. He was born gifted. Gifted with a fine brain plus the talent to make money. He didn't squander his inheritance. He developed all his inherent, character traits, and more. Some traits developed in him over the years because of the path he chose. The analysis of his hands reveals to us what Gates is all about. 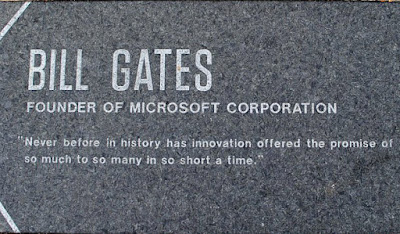 Almost every sign in his hand tells us of his sense of balance. The shape of his hand tells us that he views things from a broad perspective. The way he holds his fingers and thumb emphasises this sense of balance and tells us that he does not hold extreme views. His excellent finger of Saturn, which is the balance wheel, tells us about his wisdom and prudence, as well as trustworthiness, strong focus, and dependability. The headline confirms the common sense that he has in plenty. And although he thinks brilliantly and independently,
his originality does not make him a maverick. When he takes decisions, he weighs the consequences, even if he goes against advise.
Bill's fingers are square-tipped, but the Jupiter (index) finger is conic and all the fingers have pronounced second phalanges – on both his hands. (The writing hand tell us of the current state of mind and the non-writing hand the past). A few third phalanges are also developed, particularly that of Mercury and Saturn. The Mercury (little) finger long as well, longer than it is for most people. The palm is broad, and the finger lengths and palm size are balanced with each other. Which means that his fingers are neither too long nor too short. He has a pronounced Apollo (ring) finger. The lines on his palm are well-etched, and he has a long thumb, which is a low-set and it also has a good balance of its first (Will) and second (Logic) phalange. The mounts on his hands are developed, particularly the Moon, Venus, Mars and Jupiter mounts.

A creative businessman
A combination of these hand features shows that Bill Gates enjoys creating, and also enjoys making money out of it. These seem to be inherited qualities. It doesn't matter which profession he had decided to follow, he would have minted money. He has astute business sense and shrewdness in the judgment and understanding of people and situations. Money and success are important to him and he has an economical mindset as well.

Is philanthropy shown on his hand?
Bill Gates is famous for his philanthropy. Surely this quality sits uneasily with such a hard-core businessman? Businessmen generally have a ruthless streak and do not get too involved in social causes. The answer is clearly etched on Gates' hands.

His hand shows a broad perspective on life to start with, telling us about a person who is not selfish and or narrow-minded. He can also be a bit impressionable and he is willing to absorb things from the outside world – different views, and different outlooks. This enables him to see things beyond himself. There is also idealism in his personality and a belief in a higher cause. This means that whatever talent he has, whatever job he does, he will be guided by the desire to make a difference. At the same time, he is not the type to shirt mundane tasks.
He likes to make a splash, and do things that create an impact, and he enjoys fame and name. He tends to think big.

The qualities described above do not necessarily explain the depth of the charity work that he does. But his hand does. Bill Gates's hand shows compassion, generosity, sympathy, and a willingness to help others. While helpfulness is seen on both his hands, the other qualities are not present as strongly on the left hand which means they have been developed probably because of his inherent idealism, broadmindedness, intelligence, sensitivity, love for people and humanity, and one presumes because of his success.

Other qualities
His optimism levels are high, maybe remarkable. His hand shows an agreeable, happy nature, although underneath this agreeableness and friendliness Bill Gates is determined, and likes to get his own way. His aggression levels are fairly high, and he has the ability to control and manipulate and also use his tact and fluency of expression to get his will done.

However, he does not possess the strong domineering and dogmatic streak that some successful people have. In fact, he tends to have a flexible will, and then there is his ability to be influenced, not just because he has a strong ability to reason, but because he will not let his ego get in the way.

If one has to sum up, one can say that Bill Gates has one of the best hands out there. It is not often that one comes across such enormous talent, as well as someone who is a balanced and decent human being.

His hand appears to show some health problems, at least in the past, although it's difficult to be sure without studying the lines on the palm closely.

Related Reading: The hands of Elon Musk or Warren Buffet's hand reading or Steve Jobs' hands tell us about his inner self or Julian Assange's hands reveal that he is not a predator!