The movie "Sanju" is about the life of Sanjay Dutt, and has been criticised for glossing over Dutt's transgressions. It has been said that the film is dishonest. Is it dishonest?

In other words, is Sanjay Dutt a good guy or a bad guy?

The facts of Sanjay Dutt's life are all over the media - about his difficult relationships, the drugs, buying weapons from criminals and so on. Looking at these facts makes one wonder whether Sanjay Dutt can really be the confused good-intentioned soul that the movie attempts to portray.

The hands can reveal the real person. They can give us an idea who Sanjay Dutt really is.

Dutt's hand is not the best. Not refined. He has
excessively developed mounts, especially those of Moon and Lower Mars. Not the best mounts to dominate a hand. The Jupiter and Venus mounts are also developed. The Headline is weak, particularly in the first half of his life, but this is not evident on his left, passive hand. The Heartline, though strong, is not long, and does not enter the Jupiter mount. The third phalanges are thick, the second phalanges are on the shorter side, and the first phalanges though not short, are broad. The logic (second) phalange of the thumb is thick. And there appears to be a line rising from the Headline, going towards the Heartline.

You can take a look at one of his hand photographs here. 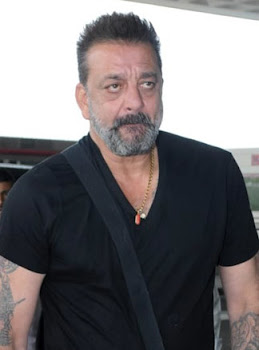 If I didn't know this hand belonged to Sanjay Dutt, I would have said it belonged to an aggressive person and someone who was impulsive, a person who acted without thinking too deeply whether his actions could hurt others. I would say it was the hand of a person with volatile emotions and someone who was blunt. Certainly not an easy person to get along with, because there would be issues with logical thinking. The pushiness shown on this hand could override reason, especially when emotions are aroused. This was the hand of a person who is difficult to reason with.

And then, if after reading all this, I was told that this was the hand of Sanjay Dutt, then I would say that he is lucky to have been born to Suneel Dutt. If he had been born in an unknown, ordinary family his personality could have landed him in bigger trouble. He was lucky because he had a name, a career and a life to get back to. It probably saved him.

Sanjay Dutt's hand shows that he has a well-developed imagination, a creative side, moodiness, and intense feelings, but poor impulse control.

You can always check out the hand analysis of all other Bollywood actors on this website, and also actors from Hollywood.

(Free photo of Sanjay Dutt from the wiki: Bollywood Hungama/CC BY [https://creativecommons.org/licenses/by/3.0])