Is it possible to find out the kind of hand a person has from past events and also known behaviour? In a broad sense, yes. This is nicely illustrated in the hands of famous author Mark Twain.

Mark Twain was an amazing writer and that's a well-known fact. What is less widely known is that he was a poor businessman and had to file for bankruptcy due to bad investments although he recovered his fortune because of his writings.

His hand shape and fingers are unusual. All his
fingertips are conic, with the thumb and little finger almost pointed in appearance. While the first phalanges are all long, the second phalanges are distinctly waisted and also a little short. The third phalanges of the Apollo and Mercury fingers are underdeveloped. The lines on his hand are fine and well etched. The Head and Heart lines are long and quite perfectly balanced. The Fateline is long, reaching the Mount of Saturn, but it’s wavy. The Jupiter, Venus and Moon mounts are developed, and the Jupiter finger a little curved, standing out from the rest of the fingers.

What do all these signs tell us about Mark Twain, the man?

The hand tells us that he was a very impressionable soul, and an artistic one at that. We also see that he was an extraordinarily intelligent man. Expressive abilities are highly developed and refined, clearly seen from the length and shape of the Mercury finger, its setting, the long first phalanges, and supported by the long fine Headline and developed Moon Mount. Distinct independent thinking is also seen. The impressionability would greatly add to his talent as a writer of fiction. The ability of intuition and imagination is a great combination with the ability to string together beautiful poetic words.

The hand also clearly shows that Mark Twain, though highly intelligent, had no head for business. Although he has a practical Headline, his impressionability and idealism meant almost zero business ability. His decisions regarding business would not be based on reality. Also, his hand shows a reluctance to engage himself with the mundane aspect of life. This would prevent him from exploring the tedious details of any business idea/plan. 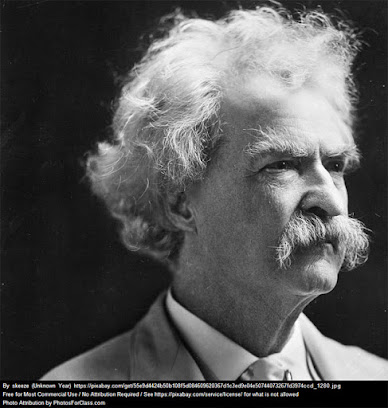 Mark Twain was also known to have veered towards dark thinking at the end of his career. The thickness of the third phalange of Saturn stands out amongst the rest of the fingers, as does its length. In addition, the lower part of the Moon mount is developed.