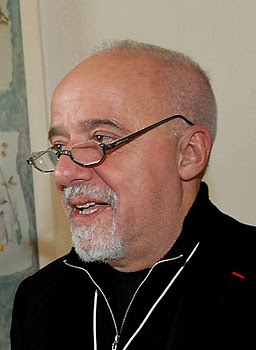 Paulo Coelho’s hands show a heavy development of mounts, short,
straight, plump and flexible fingers with square tips, a very large thumb with a well-developed and supple top phalange, and good knots on the back of the hands.
Unfortunately, the headline on his hand is not visible and therefore one has to rely solely on the shape of the hands and fingers to get a glimpse into his personality. It was disappointing to be unable to check the headline on the hands of an intellectual.

Oddly enough, the shape of his hands and fingers does not show him to be an intellectual. What it does show is
that Paulo Coelho is a highly imaginative, intelligent, and creative man who is quick thinking and impulsive and likes the good life. His creativity is of the practical, not intellectual or esoteric type. His hands reveal him to be a person with pragmatic views who is guided by the head and someone who is far from religious or superstitious.

There is a melancholy side to the personality and some love of money is evident. However, without seeing his headline I cannot confirm this aspect.

There is considerable organization of thought and thinking ability and these qualities would go to make him a good author.

His strong willpower cannot be called a flaw in his personality, but at times this dogged determination can become a fault as it could turn him into someone who is stubborn and a bully. This trait, along with Coelho’s pragmatic and no-nonsense nature, could result in his rubbing people the wrong way. However, he has the best of intentions, and genuine warmth and liking for people. He is a straightforward man with an affectionate and forgiving nature.

(Paulo Coelho is a  Brazilian writer)

You might also like to read what the hand says about Cristina Fernández President of Argentina or check out the hand readings of  Spiritual Leaders from around the world.
Hand readings of Indian authors: Dr Sarvepalli Radhakrishnan's hand reading or Dr. A.P.J. Kalam’s hand reading
Photo credit: Ricardo Stuckert/PR, CC BY 3.0 BR