The major features of Shahid Kapoor’s hand are the wide palm, evenly set fingers (except Mercury), well-developed knots, strong and long heartline, balanced headline and strong Moon, Venus and Upper Mars mounts. This shows his imaginative and creative personality, above average intelligence and broad thinking. From the shape of his hand and fingers, Shahid comes across as an unselfish, broadminded and passionate guy with a big heart. At a personal level, he would make a good partner because of
his understanding, loyal and loving nature. 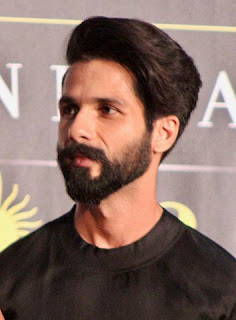 These signs also show an attractive and warm personality, especially attractive to the opposite sex (this is nothing to do with his looks, which of course would be an asset).

You can check out the photo of his hand here (a link sent to me by a reader) and here.
Shahid Kapoor has strong Apollo (ring) and Jupiter (index) fingers and the latter is slightly curved. The lines on his hand are dark and clear and his palm more broad than long. The heartline is dominant on his hand. The fingers appear to be more short than long and he has a strong thumb. The Jupiter finger is conic-tipped. The phalanges of his fingers are fairly well balanced and the first phalanges are broad as well.

All this shows that he is very clear about what he wants in life, and is basically a simple guy. He is fairly strong mentally and doesn’t get discouraged easily, with the ability to stick with it and bounce back from obstacles. This probably was an important factor in his success. Plus, he is strong-willed, but not excessively so. There is reason and logic present. In fact, his hand does not show any personality characteristic which can be considered excessive or extreme, and this makes him a regular guy in most aspects. If there is anything a little pronounced in his hand it is his creative and imaginative side.

He is known to be domineering and he is like that if one goes by the hand too. One of the reasons for this could his tendency to think with his heart rather than the head. This is a disadvantage for anyone who wants to be a success as such people often make big decisions with their heart.

He is also moody and restless. There is a love of nature and a fondness for music.

Although he tends to be idealistic overall and can take a strong ethical stance, he is fairly pragmatic in his thinking, whether it is to do with his career or in relationships. He is not the kind to put his partner on a pedestal and this would probably make him a good long-term partner choice.

An interesting characteristic is his analytical and planning ability. He is likely to plan his moves very carefully. This man is mentally quite organized. However his hand does not show that obsessive search for excellence in his craft, and this is probably what prevents him from reaching the heights he wants to.