It's not surprising why Arvind Kejriwal and Anna Hazare did not see eye to eye. Their hands show that both of them are headstrong but that is where the similarity between them ends.

Arvind Kejriwal's broad hand with the good length of fingers, the slightly low-set and long thumb and deep lines are impressive. It shows not just an energetic, strong, intellectual, balanced and focused personality, it also shows a fine calculative mind and an
independent, original mindset. People skills exist side by side with compassion. Check out a hand photo of his here and here. 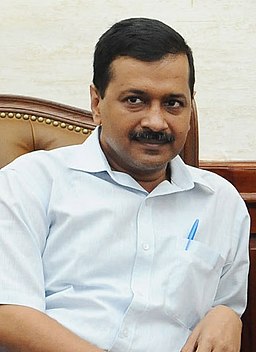 In addition, everything about his hands, from his lines to the shape of his fingers and hand speaks of his pragmatism and this can be seen as a strength because with his head firmly in control he will try and keep the balance, and everyone (whom he believes to be useful) on his good side. In another sense, it can be seen as a weakness because it shows limited idealism (as compared to Anna Hazare's idealism). Kejriwal may believe in a cause, but he is not predisposed to righteousness or highmindedness of any type. This means that it's the end which matters, not the means.

Manipulative and shrewd behaviour is a part and parcel of his personality; it is his second nature. Kejriwal's hand shows that he is unlikely to do anything without a motive. Besides, he will do what he has to do even if he does not like it because pragmatism prevails.

He has good first phalanges, especially that of the Mercury (little) finger. This shows his ability to be articulate. Oratory is one of his skills.

He has the hands of a career politician, and thus is as different from Anna Hazare as chalk from cheese. Power is important to him. Smart and calculating, he makes a good politician even if he is not nice. More so as his hand shows a genuine belief in a larger cause even if he sees himself in the thick of it. He will do what he wants, even if he needs his daily dose of attention and can be vindictive too. People who are currently in power should be afraid of him because Kejriwal is in it for the long haul.

You might also like to see hand readings of other Indian politicians like Will Pranab Mukherjee make a good President? or the Hand Reading of Akhilesh Yadav or The long ring fingers of Sharad and Ajit Pawar or Varun Gandhi and Rahul Gandhi - a comparison

Or check out the hand readings of more than 50 other Politicians, from India as well as the rest of the world.