Your hand lines are a reflection of you; not vice versa

Your future depends on who you are and how you behave. Not on the lines or the signs of your hand. Lines do not control you or your future. You do. The lines are formed according to how you think. The hand is a reflection of your mind, not vice versa.

Despite writing about this several times I get people who misinterpret this to mean that their fate hinges on the lines of their hand. They believe that if their hand lines are good they are lucky, and if the lines are bad it's bad luck.

An anxious businessman wanted to know if he was going to bring "financial ruin" on himself because of
certain crosses and bars he saw on his hand. A pregnant woman asked whether a cross on her "marriage line" meant a miscarriage. An excited young man wanted his hand read every few months to find out if a "star" had appeared, a sign which he believed would give him the fame he so badly wanted.

The truth is that lines on the hand are formed because of who you are. Everyone does not have the same lines for precisely this reason.

The businessman's hand showed him to be a very ambitious and materialistic person with a tendency to be a little reckless. That was what was going to get him into trouble, not the deep cross on his hand. The deep cross appeared on his hand as a warning to a future calamity only because of who he was.

As for that young woman who feared a miscarriage, miscarriages cannot be read from the hand, and even if they could be read hypothetically speaking, and the person fears some medical calamity, the best course of action would be to go through a complete medical check-up and ask the doctor what could be done to prevent what is feared.

Many of the so-called predictions based on "signs" on the hand are superstition, nothing else.

I asked the excited young man (the one who thought he saw a star developing on his hand) whether he had done anything in the last three months to bring about a change in thinking. Unless he was sure that he had taken some productive steps, unless something dramatic had happened, it was unlikely that a star would miraculously form. 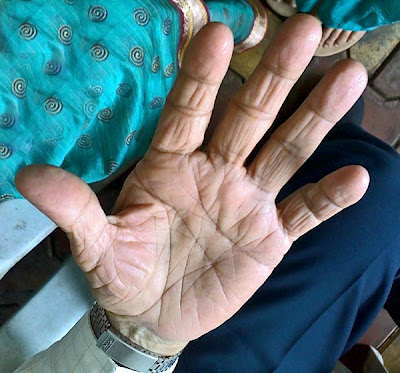 It’s best is to use the hand to understand yourself better, and then adopt a problem-solving approach rather than obsess over hand lines and imagine that one's future is fixed.

True, the worse the hand, the stronger the character needed to change things. But finally, it is all about self-responsibility.

You might also like: Stars, Crosses, Symbols and Superstition in hand reading or Can Palmistry predict future events?  or Death and hand reading

Or What to expect from a private hand reading