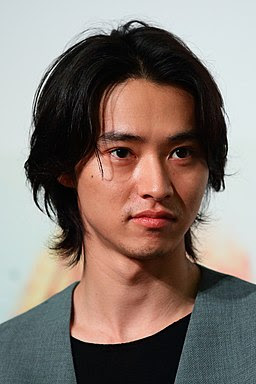 Kento Yamazaki is a popular, young Japanese actor. His personality is the thoughtful, cool-headed type, and behind that exterior burns a great desire for excellence. This is what is revealed by his hands.

His hands are largish, with long fingers and a long palm. The fingers are waisted, with prominent second knots and the first phalange of his fingers are long, with either squarish or tapering tips. The third phalanges of his Jupiter (index) finger and Saturn (middle finger) are also long but neither of these are thick. The lines of heart and head are well-marked and above-average in length, with the headline leaving the lifeline a little later than it normally does. The lifeline is well etched too, and its position is a little outward, not close to the thumb. The mounts of Jupiter, Mars and Mercury are developed, but not excessively.

he does not have these lines on his hands. They are likely to be lighter than the other main lines.

Kento's hand reveals that he has a perfect balance in his personality as regards the desire for fame. This desire is muted, and he is not the kind who will seek attention for the sake of it. This is not so common in the hands of actors, as many actors aspire to be actors because they want the attention and they want the fame quite badly. There is no craving for money seen on Kento’s hand either. This does not mean that he does not want these things, it just means that he will not sacrifice too much to achieve fame or riches. Success is what he desires and there is a great desire to be the best at what he does.

His hand also shows sensitiveness and refinement; he is the kind who will not like to hurt others. There is an ingrained sense of fairness in his personality.

There is some kind of physicality evident in him, and this energy will go a long way in making him successful.

He has empathy and is the helpful type, often going out of his way to help others. The outside environment tends to affect him keenly.

There is no dearth of talent, imagination and creativity seen on his hand. With his ability to work hard, and the aspiration to be the best, there is no limit to what Kento Yamazaki can achieve.

Related Reading: Read about what Takeru Satoh's hands say about him - another famous Japanese actor.
Or read about other famous East Asian actors like Lee Min Ho or Hyun Bin from Korea or read about Hollywood celebs from East Asia like Jackie Chan, Bruce Lee, Michelle Yeoh, Chow Yun Fat,
Or maybe you would like to read about East Asian politicians like Xi Jinping or Li Keqiang or Lee Kuan Yew of Singapore. Or perhaps the businessman, Jack Ma or spiritual head His Holiness Dalai Lama from Tibet.
Photo credits: Girlmaking, CC BY-SA 4.0