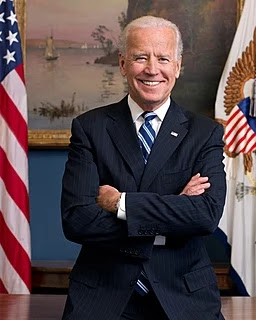 Joe Biden has the hands of a statesman. He has a largish hand, pronounced first and second knots on his fingers and long, fine lines along-with a low-set thumb held a little apart. His fingers, though short rather than long, are not too short. His fingers are straight, except for the Jupiter (index) finger and the thumb is a balanced one with a slightly waisted second phalange. The mounts of Venus and Moon are most developed but the mounts of Jupiter and Lower Mars good too.
The size of the hand matters. It is the size and shape of the hand within which the actual lines are to be interpreted. When the hand is large (relative to the body) it shows a thinking person. The developed knots add to the thoughtfulness. One cannot help but compare Joe Biden’s hand to Donald Trump’s hand which is supposedly small. People with small hands tend to be more emotional and tend not to analyse or think too much. People with small hands do not make great leaders.
A large hand by itself does not automatically mean that the person is superior. In the case of Joe Biden, the rest of the hand is very good. His thumb is a good length, with balanced phalanges, only slightly bending back. The lines show high intelligence which when combined with thoughtfulness shows a person who will make decisions which would have a high chance of being correct because pros and cons will be weighed. Joe Biden’s hand also shows warmth and a love for people – he is a good man. He is the type of person who will think of the “other.”
You can check out photos of his hands here and here.
However, Biden may not always be what his image projects because his hand shows a manipulative nature. This is a very common sign in career politicians and in many successful people as well and is not necessarily a bad sign. It depends whether the manipulative ability is used for good or bad and this depends on whether the owner of the hand is a good person or not. It also depends on the profession the person is in. In a businessman, it may not always be a great sign but in a politician, it is in the very nature of one to be well...a politician! In the case of Joe Biden, his hand shows integrity, honesty, idealism, as well as deep compassion for others, and this ensures that his abilities are used for good.
He is diplomatic and clever and knows how to get what he wants but he is a reasonable man, only very slightly impulsive and not stubborn. He would have an open, adaptable mind. If one has to sum up, his hands show a sympathetic person who believes in freedom and independence, not just for himself, but also for others. It is in the very nature of his thumb. Hillary Clinton did not have such a thumb. Barack Obama did but the difference is that Joe Biden is more of a doer, and less of an intellectual as compared to Obama.
Related Reading: You might like to read about Mike Pence or a comparison of the hands of Bernie Sanders and Hillary Clinton or a comparison of the hands of Hillary Clinton and Barack Obama or reads about Heads of State from all over the world.
Posted by Nita at 5:46 PM