Barack Obama is ambidextrous and this makes reading his hand a little tricky. In such cases, it's best to check both hands. To make things more complicated, Obama's right and left hands are quite different, but as he writes with his left hand I have depended more on the left hand than the right.
Barack Obama's hand shows that he is a thinker and an intellectual. The top phalanges of his fingers are developed, fingers are long and the headline is finely well etched and long. Plus, his hand has a good texture, showing a refined mind. Combine this with a total lack of animal instincts, and it is clear that he is suitable only for a mental occupation.

Check out one of his hand photographs here and here. The photo below of Obama waving is in the public domain, free to use. It is of his left hand. Obama was left-handed. 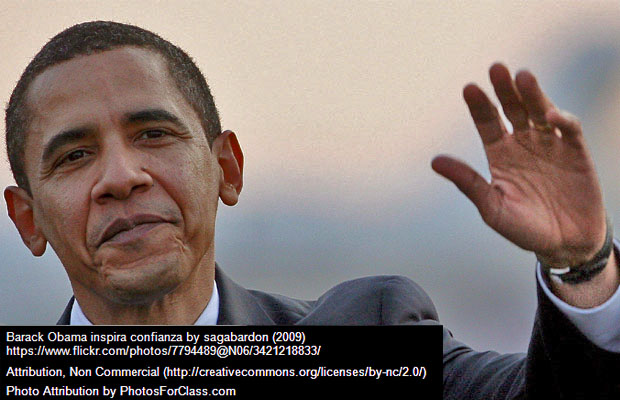 He is analytical and thoughtful, with an inquiring mind. He has excellent reasoning powers which are confirmed by the length and phalanges of his thumb. The placement of his fingers shows his independence in both thought and action, but not overly so. He has original ideas but often modifies existing ones in creative ways. The gaps between the lower phalanges of his fingers and the limited development of the mounts show that he likes to pay minimum attention to physical needs like eating and drinking. He will never let his life be adversely affected by his physical needs.

He has a long thumb with a good balance of both phalanges and when combined with the other features of his hand like the lack of stiffness of his hand show that he is not stubborn. He is, in fact, an agreeable and reasonable person, easy to get along with, even if a little cold and perhaps not very warm or giving. He has a long hand, a restricted Mount of Venus and long fingers as well. He is more extroverted in his younger days but introversion is likely to increase as he grows older.

Some of the other features of his hand are a broad quadrangle, a gap between the head and lifelines, a slightly low-set thumb, straight fingers with a strong Apollo (ring) finger and a strong lifeline. All this shows that he is able to see the broad picture, able to see another point of view and is also generous and compassionate, the kind of man who wants to do good in the world. He is bold and fearless too.

Obama is energetic, with leadership qualities. He is not exceptionally adroit or diplomatic but he can handle people as he is a shrewd man. He likes the limelight and has charisma to some extent as he has a long ring finger, but without strong mounts, this would be limited.


Is Obama hiding something behind that calm smiling exterior and those seductive words?

Well, yes and no. He is definitely a very smart man with a great personality, although I would not call him brilliant. He does not have a long Saturn (middle) finger, the finger of wisdom and balance. This could take away long-term focus. It could also mean the lack of a formidable driving force in his personality, and when combined with a certain coldness of temperament, it could mean someone who may not be able to follow through, even though he may be a visionary. Besides, his Jupiter (index) finger is a little low-set and when combined with the fact that he has a strong Apollo finger it shows a man who is too dependent on public opinion to take bold steps.

Money does not matter to him much so obviously he will never steal, not that American presidents do that! He is also not a sensual person so he will not get embroiled in murky affairs. He has a strong sex drive, but he is not the impressionable type. He could even be a little distant with loved ones although very devoted. He will also not do anything that will hurt human beings, because there is no doubt that he is a good man who wants justice for all.

If one has to sum up one can say that Barack Obama has a controlled and calm disposition and is a smart, intelligent man with compassion.

Related Reading: Read about Hillary Clinton, and the difference between her and Barack Obama. Also check out this post: Does Barack Obama deserve the Nobel Peace Prize because of his ideals?

Or the hand readings of other famous Americans like Mark Zuckerberg or Warren Buffet's hand reading or Julian Assange's hands reveal that he is not a predator! or the Hand Analysis of Bill Gates.

Or check out what the hands say about Heads of States from different parts of the world.