Out of the 19-20 movies that Sonam Kapoor has been in, only about 4-5 have been hits, according to Box Office India. She is not considered a super successful actor. She didn't make it to the A-list. But her hands show that she has the ability, the talent.

Does this mean that Sonam is an underrated actor? If this is so, what went wrong? Why did she not climb to the pinnacle that she rightly should have? Read on and you will find out why. Her hands give us some of the answers.

Sonam has long fingers, including a long thumb and a particularly long Mercury (little) finger, all with tapering tips and long second and third phalanges and average first phalanges. The second phalange of the thumb is broad and there is a gap between the head and lifelines at the start. The Moon mount is developed. The palm is longish and the heartline is curved, going in-between her first two fingers. The headline is wavy and darker and higher in the beginning. On the left passive hand (Sonam is right-handed) her heartline and headline are both straightish. 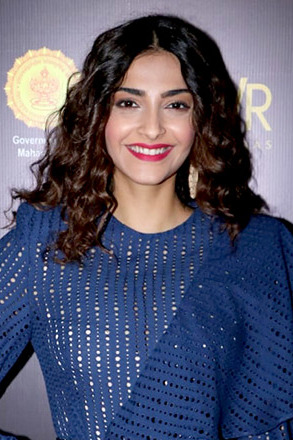 You can check out a hand photo of hers here.

This hand reveals a personality who feels deeply and yet suppresses her true emotions and prefers to avoid emotional confrontation. She is known to be outspoken but that's because she is a person who feels more than she thinks. Her complex emotions are likely to lead to difficulty in understanding herself.

Sonam tends to be intuitive and would tend to make decisions based on her feelings at the time. Unfortunately, this could result in her saying and doing things without thinking them through. For Sonam, feelings are very important, and thus her thought process may not seem logical to the outside world.

Ambition is not an intrinsic part of her character although her hand shows ambition in the earlier part of her life. This ambition is likely to wane as she grows older. This means that she lacks consistent focus in one direction.

She can also be self-indulgent, likes the good life and prefers to avoid regimen. Yet she has excellent will-power and thus there isn’t really anything that she can't do if she sets her mind to it. If she is motivated enough.

The journey of life is more important to her than getting to a fixed and ultimate goal. This could lead to more happiness in the long run.


The emotionalism would affect her love nature too. She is likely to be demonstrative and giving and would be able to express her emotions readily. This is a great quality for an actor if discipline, ambition and focus also go along with it. Her hand shows emotive/acting talent which is far above average. Perhaps getting into the skin of another character could also be a release for her own deep emotions.

Even though she is armed with talent and will power, the question remains how committed she is. And then there is the question of whether she would be happy in this big bad world of Bollywood. She may be bold but is not pushy nor aggressive and definitely not manipulative. These are the very qualities which catapult people to great success.

You might also like to read about the comparison between Kareena, Katrina, Priyanka or Aishwarya? or read about the personalities of Alia Bhatt, Aishwarya Rai, or Katrina Kaif or Kareena Kapoor or Rani Mukerji and Bipasha Basu

Or check out some male Bollywood stars like Hrithik Roshan, Aamir Khan or Ranvir Singh or The magic behind Rajesh Khanna's superstardom

Or check out the hand analysis of all other Bollywood (Indian) actors on this blog, and also actors from Hollywood.

Free Photo of Sonam by Bollywood Hungama [CC BY (https://creativecommons.org/licenses/by/3.0)]
Posted by Nita at 8:51 AM