Kangana Ranaut - who is she really? 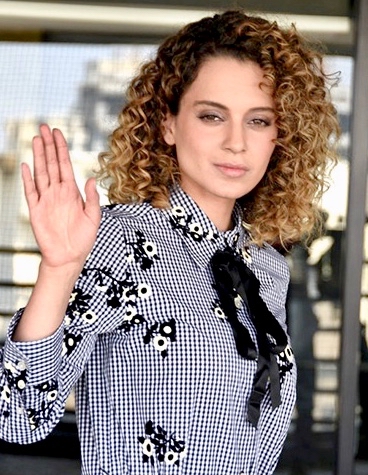 Kangana Ranaut* is apparently stubborn, with "high self-esteem, super sensitive, and bold" – words she has used to describe herself. She has also called herself difficult, tough, and someone who has always done what she wanted.

Looking at her delicate features and elf-like appearance, one cannot help but wonder whether this is a façade? Bravado? Is Kangana really the badass that she calls herself, from the inside?


The hand never lies, and studying it can give us some answers.

Kangana has a large palm, shortish fingers, some of them conic at the tips, and the heartline is prominent on her active (right) hand. Her fingers are normal in length, although the little (Mercury) finger is low set and sticks out. The middle (Saturn) finger is slightly bent in the top phalange and it's likely that the index (Jupiter) finger is also bent. Despite many hand photos being available on the net, none are really good enough to show her palm lines clearly. The photo published above is a free photo from the wiki.

You can see additional images of her right hand here, and that of her left hand here.

In the photos, Kangana's heartline tends to stand out. It's long, dark, straightish and low-set. The headline is better in the latter half of her life, either around thirty or after the mid-thirties.

Her hand shows some ego, not excessive, and this is a developed characteristic (not present on her passive, left hand), and when it comes to self-esteem (this is a different personality characteristic from ego), her hand does not show anything but normal self-esteem…neither high nor low. This is actually a good thing, because high self-esteem is an indication of a personality a little out of balance, and combined with ego, it can mean a dogmatic, arrogant personality. In fact, people with self-esteem higher than normal are not usually good actors as they find it difficult to get into another’s skin.

Kangana’s hands also show that she can be controlling and dominating, but she is not dogmatic and neither is she arrogant. In fact, her hand shows her to be far less controlling and manipulative than many Bollywood stars out there. Kangana’s fault perhaps lies in the fact that she is not conniving or subtle enough.

Her hand shows a normal amount of stubbornness, but she can be a little headstrong. Her hand does not show her to be an unreasonable person, although she is something of a cynic.

Her weakness is possibly her idealism. This is probably why she refers to herself as difficult. She would not like to compromise her ideals easily. Or if she does, it will eat into her.

This personality characteristic becomes enhanced because of her impressionability and the fact that her heart plays such a strong role in her personality, at least the way she is today. She is likely to attain a better balance in this aspect of herself in a few years, but presently she would think with her heart. This will not make her sound like a logical person to others, but she has her own logic.

Interestingly, her passive (left) hand shows a good balance between the head and heart qualities. Something in her environment changed her. Her background is well-known, that she struck out on her own, defying her environment. She also likely went through severe emotional trauma in the process. Unfortunately, without getting a clearer look at her lines it is difficult to say more on this.

And is she the tough nut as she says she is? Well, she is certainly an independent thinker and the kind of person who will not get cowed down by society. She is likely to do what she wants regardless of what other people think. The hand confirms that. Neither is she a weakling, not with her strong Jupiter finger, Jupiter mount, and strong thumb. But her outspokenness and courage is more a result of her confidence and strong heart qualities rather than any stoicism of nature. In fact, it is more likely that she takes things harder than the average person.

She is high spirited and enthusiastic, and very independent. And if her behaviour seems odd at times, it is most likely that she is not using her objective and thinking faculties as well as she should. She is very likely to change in the coming years, and this will make her happier and more at peace with herself.


*Kangana Ranaut is an award-winning Indian actor, based in Mumbai.
Related Reading: Arnab Goswami - what lies behind his television persona?

You might also like Kareena, Katrina, Priyanka or Aishwarya? – a comparison of these four fascinating women actors.

Or check out some male Bollywood stars like Hrithik Roshan, Aamir Khan or The magic behind Rajesh Khanna's superstardom
Or the hand analysis of all other Bollywood (Indian) actors on this blog, and also actors from Hollywood.