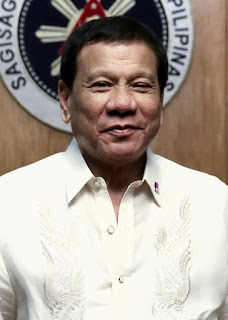 If I hadn't known that these were the hands of the President of the Philippines, Robert Duterte, I would never have guessed it.

The lower portion of this hand is dominant, the thumb high-set and closely held (near the palm), the second phalange of the thumb is thick, the quadrangle (space between the head and heart lines) is narrow, and the headline is average. The Jupiter (index) and Mercury (pinky) fingers are pointed, a fairly unusual sign in a successful politician. And the Mercury finger is long as well. The mounts are mostly well developed, particularly the Mount of Moon, and the Jupiter finger is bent. When read together these signs do not paint a pretty picture.

This hand shows a personality that is impulsive, and idealistic to an extreme. The ideals that the owner of this hand holds may are not always practical.
There is also a certain coldness in his nature. You can check out images of his hand here and here.

Contrary to Duterte's image, the hand reveals secretiveness, and a tendency to be suspicious, particularly of anything unfamiliar. This is not a person who lets people into his heart easily. And if he gives the impression of frankness probably because he can be blunt, and as everyone knows he can be crude at times. This is evident on his hand too.

His thinking is not independent – it is more influenced by upbringing/society. He is a person rather set in his ways, controlling, and selfishness is a personality characteristic. Clear thinking is not evident on his hand, and this can bring out negative qualities.

Yet, the owner of these hands is an enormously successful Filipino politician. Maybe there is some gem-like quality that the hand has failed to reveal. Or perhaps a clearer picture of the hand could reveal it.

One of the reasons for his success could be that he has exceptional communicative abilities, and along with the strong idealism, can make him appealing to the public. His poetic rhetoric can touch hearts. And he is not dishonest, as such. He speaks his mind. Also, as Duterte belongs to a political family, this probably gave him the right political mindset and the opportunity as well.

Related Reading: Nelson Mandela, Li Keqiang the Chinese Premier or The hand of Evo Morales or Lee Kuan Yew - Hand Reading or  Why Robert Mugabe is who he is or Tayyip Erdoğan's hand reading

Or read about the difference between Indira Gandhi and Margaret Thatcher

Or read other hand readings of the Heads of State of different countries around the world.
(Free photo from the Presidential Communications Operations Office, Public domain, via Wikimedia Commons)