The difference between Jensen Ackles and Jared Padalecki

Fiction and reality are separate – of course. But there could be similarities between the role a character plays and his/her own persona. Either because the actor is attracted to a role (which reminds him of himself) or because the director/producer thinks he/she fits it. Even if some similarities exist, they are likely to be
superficial ones. Real people are too complex to resemble any fictional character. 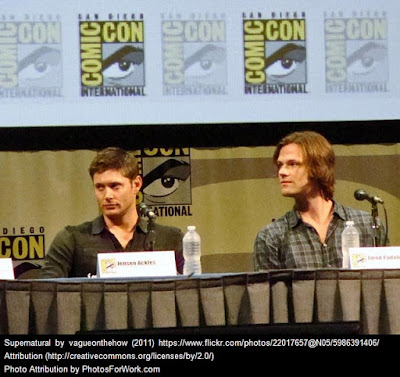 This is a brief comparison of the characters of Sam and Dean Winchester from the sci-fi horror fantasy series “Supernatural” and the real actors that play these characters - Jared Padalecki and Jensen Ackles. The analysis is from reading their hand shape and fingers and these are some of the sample images which were used: Jensen's hand photo and Jared's hand photo. The photo published above is a free one.

The fictional Sam Winchester
He is the more serious, emotional and sensitive of the two brothers, and is portrayed as innocent, emotionally dependent, at times lost. However, he is a hero, strong and brave, and ready to sacrifice himself for his brother although he can be influenced. A hero with flaws.

The fictional Dean Winchester
Dean is shown to be a swashbuckling womaniser and light-hearted, at least in the earlier seasons. He is also aggressive, and very brave. Again, a hero with flaws. Strong and protective, he expects undiluted devotion and trust in return from his brother Sam. The same kind of trust he himself showed his father John Winchester.

Their real selves as seen from their hands
Jared Padalecki (Sam) has a fairly large palm with balanced fingers (length), a good Moon mount, joint Head and Life lines, and a supple thumb. Broadly speaking, Jensen Ackles (Dean) has some similar signs which can be noted in the fairly large palm, joint Head and Lifelines, a pronounced mount of Moon, although the developed Mars and the slightly thicker and shorter fingers with their square tips show different personality characteristics from Jared’s.

These guys have some broad similarity in their characters. Both are reasonable, sensible, and pragmatic people, able to see issues in a broad way, and in the right perspective. Both have the ability to see another point of view. They are also unselfish in their approach. However, their inner natures are different.

Jared is more unselfish and more compassionate (read from his Heartline, developed Venus and thumb setting), but Jensen is quicker to react and more hot-blooded (shorter fingers, developed mounts). In reality, Jensen has the more serious and sensitive nature as compared to Jared, but is also more cynical. Jenson is also more focused and involved (relative finger shapes and lengths) in what he does, and has an intelligent approach to issues. In this aspect, he differs from his on-screen persona. Jenson is not really light-hearted deep inside, although he has a strong physicality and masculinity, enabling him to participate and engage with life more. (stronger mounts, particularly that of Mars, and the Heartline).

More about Jensen
Jensen Ackles’ hands, however, show that his mental and physical stamina is not as strong as it should be, needed for prolonged periods of intense concentrative work (Headline, Thumb) but he has a strong inner drive. It is important that he takes extra care of his health, particularly in his thirties.

Jenson's strong physical side, and hot-blooded nature (position and quality of Headline, mounts, finger shape) will tempt him by the good life, and here, he is somewhat like his on-screen character Dean.

Jared
Jared Padalecki has the stronger mind, more mental stamina, and a high sex drive. Here he differs markedly from Sam, the fictional hero he plays on the television series "Supernatural". Jared is also more of a thoughtful person, a thinker, and in this aspect of his character he resembles Sam Winchester. Jared Padelecki is also cooler and calmer in a crisis, as compared to Jenson, and he can analyse issues objectively. He is also very shrewd, even a little manipulative. In this personality trait, he differs from the on-screen “innocent” persona of Sam Winchester, at least the way Sam is shown in earlier seasons.

Humility is also shown on Jared's hand, and this is partly due to issues with self-esteem - as seen from the shape and setting of Jared's fingers. Some kind of diffidence. It is not apparent in his persona, and why he should feel diffident is not clear. I guess only Jared will be answer this question for himself. He is just the opposite of vain! Also, this is not an inherited trait, but a developed one, and it could make him think twice before taking on high levels of responsibility.

Interestingly, despite the humble nature, Jared’s hand shows a love for fame and adulation, distinctly more than that of Jenson’s. Perhaps it means that he needs more validation. This trait could become more pronounced as he grows older and it could make him over-confident (giving so much importance to fame?). Often people who lack an inner self-esteem rely too much on others' opinions and Jared should never ever take his success for granted and should focus more on his work. If Jared is reading this the advice to him would be to concentrate more on the work and developing as an actor rather than relying on the fame. This applies to criticism as well. Jared should see all the good that is in him and not get affected by criticism. As of now, he takes it too much to heart.

Jared Padalecki has the ability to take risks, emotional or otherwise. At times he may not take life seriously enough though. Between the two actors, he is the more light-hearted (Apollo or ring finger shape). In his personal relationships, he is likely to be very loyal and steadfast, ever willing to give himself fully to a relationship, but this does not necessarily mean long-lasting relationships. His tendency to idolize and high expectations of loved ones can become a problem. Jensen, on the other hand, is more down to earth, and his serious nature is likely to keep his feet firmly on the ground.

Jensen and Jared
The hands of both Jenson Ackles and Jared Padalecki show talent, imagination, and determination. Jared’s hands show more business sense although it is more instinctive. Amongst these two talented actors, Jenson is likely to find it easier to express deep emotions because of his serious personality, greater commitment, and emotional sensitiveness. Jared being more light-hearted in nature, may not make the effort to dig deep inside himself to find that raw emotion necessary to portray dark emotions. He can if he makes the effort because not only is he a talented actor, he has good health and lots of energy which can be channelled into the craft.

I personally believe that actors who have a dark side in their actual personalities can play dark emotions better because they have something to draw upon. In this sense I think Jenson has more of a dark side, but what I mean is that there is that highly emotionally sensitive and sentimental part to him which has resulted in some emotionally hard times in his life.

More Readings of television actors: What Jennifer Aniston's hands show about her personality and temperament Or Does Charlie Sheen have an addictive personality? or  or The hand reading of Miley Cyrus

You can read more about actors from all over the world, or just Hollywood celebs.