What Brad Pitt's hands say about his character traits

Brad Pitt's hands may show him to be a sensitive and refined person, but it is also true that they show that he likes to have his way. Being the refined person that he is, he doesn’t believe in overt domination. He does it more subtly and can manipulate people because he knows which buttons to press.

He has fairly long, slim fingers, a broad palm, and three of the fingers, the Jupiter (index) and Mercury (little) and Saturn (middle) fingers are at least slightly bent. The Jupiter, Moon and Venus mounts are developed, and to some extent the mount of Mercury and also the middle of his hand (Plain of Mars) His lines are of a good length and the Mercury finger is very long.  Unfortunately, there are hardly any photographs which show the lines on the palm clearly. What is clear is that he has a long, low-set thumb with a good balance of the will and logic phalanges.

However, we can get to know Brad Pitt just from the above-mentioned hand features. All of this tells us that he can be fairly short-tempered and
is a controlling person. This is not evident from his innocent looks.

Those close to him might find out that he is not as easy going as they thought he was. Pragmatic he maybe but he can be moody and cynical as well. He may not like confrontation at all, but he wants his way.

He is an articulate and imaginative person, and will use these talents to get what he wants. If he doesn't like what is happening, withdrawal will be one of the tactics used. He is the kind who would do exactly what he wants and there is vanity too.

However, he is not a self-centred person. He can be in fact fairly unselfish and broad-minded. He likes the freedom to do what he wants, but he has a good heart and will not like to hurt those he loves. He is generous, and will give the space to his loved one. He has a lot of compassion for those weaker than him. Something he has in common with Jolie. He could go out of his way to understand and help those who are unfortunate.

Possibly this love for freedom is one of the reasons why he does not like formality or rules. He would feel hemmed in easily. This also means that he does not always plan ahead, and likes to take life as it comes. He likes to live and likes to enjoy life to the fullest. He has a sense of adventure in him. His inability to plan can land him into trouble at times.

Acting talent is shown as well as a sharp mind and intuition and plenty of shrewdness. He is the kind who can evaluate situations and people quickly. But he is not the suspicious type and his basic trusting nature goes with his other qualities of compassion and generosity.

He likes money and status symbols, but greed is not shown. He is the kind who could give the money away. Making money is important to him though.

Brad Pitt is a good man and a fairly open person. He would be able to get along well with a bunch of diverse people. He is warm and affectionate, although in the first half of his life he could have had some set ideas.

Active and practical that he is, he does not hold extreme views. He is the type who will compromise and see reason. Basically, he has good judgement and knows what is good for him. He has a strong will and can do what he sets his mind on.

All in all Brad Pitt's hand shows balanced personality. He has all the qualities needed for being successful. People oriented, shrewd and talented.

In his personal life, he can become controlling but if handled right, and if he does not feel pressured, Brad Pitt can be quite accommodating and reasonable.

To find true happiness with a partner, Brad needs someone who is as unselfish as he is, and understands that he has to live his life his own way. 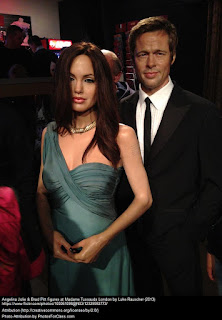 This makes us wonder: Is Angelina Jolie making him happy? Her hands can give us a strong clue to this.

also check What the hands tell us about Brad and Angelina's relationship!
Read all about the personality traits of both the women in Brad Pitt's life:
What Jennifer Aniston's hands say about her personality and temperament and how Angelina Jolie's hand shows that she is fun to be with though she isn't serious enough!

(The photograph is a free photo available on the net)