Reading the hands of an exceptional and brilliant personality can makes one's heart skip a beat. One may not be lucky enough to meet these geniuses in real life, but there is the privilege of being able to delve into their minds. In a way, that can be more gratifying than meeting and shaking their hands.

Alejandro Jodorowsky is a well-known Chilean filmmaker who is also known as a spiritual guru. I had not heard of him until a reader requested me to read his hands. Unfortunately, with so few photographs of his hands available on the internet this proved to be a difficult task. However, I was persuaded to read with whatever little I had. This is a brief reading.

The most striking aspect of Jodorowsky’s character is his exceptional creative ability, fantastic imagination, quickness, mental agility, and a high degree of intelligence, musical ability, deep passion, love, and ambition.
There is some controversy regarding him. Apparently, he said many decades ago that he had raped an actress but when that old statement was dug out, he denied the rape, said he had never done the deed; that the statement was a publicity stunt at the time. Well, his hand shows that he is certainly capable of doing such a type of stunt because he is wilful and impulsive.
His hand has strong Mounts of Moon, Jupiter, Venus and Mercury and a long, deep headline, on both hands. The heartline in comparison is shorter on his right, active hand, although it is darkly etched. The thumb is long and supple with a slightly long first phalange and it is low-set as well.
The headline and the thumb are the main signs that reveal the direction of one's life, with the thumb being the most important indicator. The key to why a person wrecks his life or takes it to great heights can be found in the hand and most importantly, in the thumb.
Check out some hand photographs of his here and here. 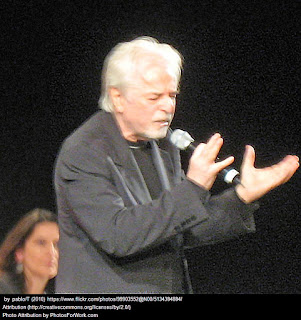 Jodorowsky’s hand shows that he has a strong will to control others and that he is quite headstrong as well. However, his basic nature is a good one, quite unselfish. He is the type who would want justice for others, as well as himself. He believes in freedom, and not just for himself. He is a good man, and incapable of rape, although he would want his way and is capable of bullying others. He is not the kind to want his way through deceit.
His hand reveals a very powerful personality and it is also a personality which wants to help others. With this kind of strong will, a person can achieve a lot, whichever direction he chooses and is liable to take his talent to its full potential. There is a direction in the life of a person with this kind of hand, almost a mission. There is strong drive in the personality, and this need to achieve is not to amass wealth. It is to do good in a larger context...something which an ordinary person may not always understand. It's to do with helping humanity and this is the main aspect of any character that distinguishes normal successful folk from spiritual leaders. Capability and hard work may make a man successful but few people have the bent of mind which turn them into spiritual icons.
One of Jodorowsky’s weaknesses is his impulsivity and that could get him in trouble, especially as he is also quite pushy and wants to impose his will.
Jodorowsky's hand also shows executive ability, and the ability to get things done.

I was asked whether Jodorowsky deserves to be a “guru,” or whether he is just a “clever businessman.” Well, he does have a materialistic streak and he cannot be considered a "wise" man as such. Just the opposite in fact. But there is evidence of altruism. What is not in doubt is his genius.

Or check out the hand readings of actor-directors like Hollywood's Marlon Brando and Bollywood's Aamir Khan or Tamil cinema's Kamal Hassan.
Or perhaps you might like to read the hand analysis of Spiritual Leaders from around the world.