Raj Thackeray’s hands were a surprise. I was expecting someone with narrow views but his hands do not show this, unlike that of his mentor, Balasaheb Thackeray. As Raj is known for his narrow politics, one wonders why it's not evident on this hands? My reading after studying his complete hand is that unlike Bal Thackeray, Raj is perfectly able to see
the broad perspective but consciously chooses narrow politics. The reasons become easier to understand as one delves deeper into his personality. 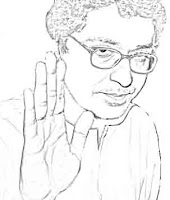 Emotional and volatile
Raj Thackeray has well developed mounts of Venus, Jupiter, Mercury, Mars and Moon. The high development of these mounts show him to be an emotional and fairly volatile person. These emotions have depth, as shown by his widely sweeping Heartline which ends on the Mount of Jupiter and the distance between it and the base of the fingers. Such Heartlines show people who are sentimental and idealistic, and also have compassion for the underdog. His Jupiter finger enhances the quality of idealism. Such people believe in a cause, and possess strong ambition to lead such a cause. The shape of the finger, thumb and Headline shows that the cause is not a religious or esoteric one, but a practical one concerning the reality around him.

Oratory
In addition, width and height of Raj's Venus coupled with the position of his thumb emphasizes the qualities of compassion and love for people. His hands also show charisma. When combined with his formidable oratory, shrewdness and the ability to understand people (exceptionally long first phalange of Mercury with a good Mount of Mercury and long finger) such people have the power to sway and influence others to a high, even dangerous degree. I say dangerous because Raj feels very strongly himself, and therefore it is easy for him to inject emotion and passion in his speech.

Drawbacks
The catch is that his love does not extend to all humanity (Heartline). His other drawbacks are that he is not as open as he should be for a leader, and is also cautious, lacking independent and original thinking and is at times hesitant (start of Headline, position of fingers and thumb). He also tends to be changeable and moody (strong Moon and Headline). These are all restricting qualities that damage his leadership ability. A true political leader has to be able to think for himself, be able to infuse fresh and original thought into his party and also be more stable emotionally. Raj also enjoys attention and wants renown (Sun finger). He will not like to be relegated to the background.

Leadership qualities
Raj Thackeray's thumb, long and well set, shows self-control, executive and leadership ability and tells us that he is a strong, determined person who is wants to be known for changing society. His purpose is not a selfish one, and money is certainly not what he is after. He is also capable and talented. However the thumb phalanges show that he can be willful and pushy, and can become a bully at times. He gets away with it because of his basic generosity with his flock, willingness to go out of his way to help them and sensitiveness to their needs.

Raj's personality is such that he could perhaps fit into another ideology, not necessarily right-wing politics. However he needs a strong cause. He cannot function without a cause, a cause that arouses his anger and his emotions. That is one of the reasons why being a right-winger sits easily with him. Overall, he is well-suited to politics as he can easily garner the love of people and control them.

Note: The sketch of Raj T has been made by me on Photoshop


Related Reading: Bal Thackeray's hands tell us about his character or check out the hand readings of some chief ministers of Indian states like Akhilesh Yadav, Mamata Bannerjee or Mayawati.