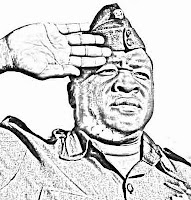 Amin’s Lower Moon and Lower Venus are much thicker than his upper mounts, and so are his second and third phalanges. This shows that the coarse and brutish side of his nature dominated, as did his materialistic side. The relative length of the finger phalanges points to a lack of interest in mental pursuits and all-consuming interest in material things. This is confirmed by the way his Headline swoops up towards the Heart Line and Mount of Jupiter at the start. And then, his temperament shows a tendency to excess in everything (thick phalanges and lower mounts). When it comes to his desire for riches, only his libido would compete with the strength of his greed. His Jupiter finger also shows a love for power, but greed is what ruled him.

The lifeline starting on the Mount of Jupiter is a rare sign, and only bad if found on a bad hand. It shows a person who will go to any extent to fulfil his ambitions and a person who has had a very strong and intense ambition from a very young age. Such a person desires wealth and fame and from a young age tries to be in contact with such people.

Related Reading: The hands of Dictators! There you will read about dictators from all over the world, like about how Adolf Hitler's hand reading shows him to be a poor specimen of humanity or Kim Jong-il's hand reading