What struck me immediately after going through Lee’s hand pictures was that he had
good mounts, particularly that of Middle Moon and Venus, although Jupiter, Mercury and Upper and Lower Mars areas are also developed to some extent. However, this development does not show anything negative as the base of the hand is not heavily developed. The other major features were the spatulate shapes of some of his fingers with their waisted phalanges. His hands are also quite large as compared to the rest of him, and the palm area is very broad and yet, the lines are not in proportion. Energy without the pathways. An inner energy that needed to be expressed. A tragedy in the making.

See a picture of his hand here. 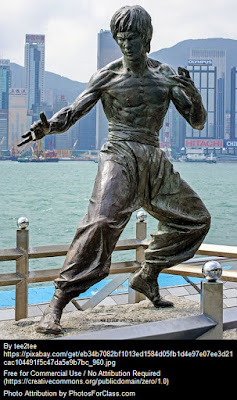 An interesting aspect of his hand is that he was an original thinker with a philosophical bent of mind, almost spiritual in a sense. This seems to be puzzling in someone who was dedicated to martial arts as this sign is often seen in true spiritual leaders. This great originality of thinking was clearly marked in the shape of his Saturn and Apollo fingers and it shows Bruce Lee to be someone who broke the rules more often than not and rebelled against authority because of his own unique ideas and an overpowering desire to invent new methods. He was the type who would choose his own life come what may. The large gap between his head and lifelines and the setting of the Mercury (little) finger adds fearlessness, boldness and an action orientation in addition to an already individualistic nature. At the same time, Lee’s hands show amazing levels of energy, which when added to his independent and bold nature can turn a person into a dynamo.

However, his hands show no signs of a violent nature. Far from it. They, in fact, show a person with a cool head, a philosophical bent of mind, and belong to a man who was amazingly calm in a crisis. This is not to say that he was not aggressive or pushy, but he was not excessively so. His hands do not show an uncontrollable temper or passion without control. Instead, they show a productive imagination.

Related Reading:  You can read the hand analysis of Jackie Chan and Michelle Yeoh or South Korean Lee Min Ho and also hand readings on people from China or Actors from around the world or check out just Hollywood celebs.

Or check out the hand readings of other international players and Sports stars from different fields.