A good statesman needs to have the qualities of compassion, a strong sense of justice, leadership abilities, integrity, and of course good administrative ability and vision. Do Salva Kiir Mayardit's (President of South Sudan) hands show these personality characteristics?

The significant features of Kiir's hands are the longish shape of the hand, deeply etched lines, a few conic fingers or normal length, a very wide mount of Venus, a high-set and sloping headline, large supple thumb and a comparatively clean hand, with not too many lines crisscrossing each other. Either that or the finer lines are not visible on the hand.

No doubt that Salva Kiir’s hand is that of
a leader. His thumb, Mount of Venus and Heartline speaks volumes for his compassion, sympathy, willingness to help others, and his generosity. He is a warm, loving human being with strong sympathy for the underdog. He is also fairly simple at heart, and with strong ideals, which he will not compromise for anything. His strong principles and compassionate nature are the strongest aspects of his hand.
He has a good thumb, a little low-set, and the first and second phalanges are well balanced, although the digit does seem to be a little too supple. The lines are also a little thick and there is a significant gap between his head and life lines. The headline starts are the base of the mount of Jupiter. The palm is longish and the fingers are medium-length.
Check out his hand photo here. 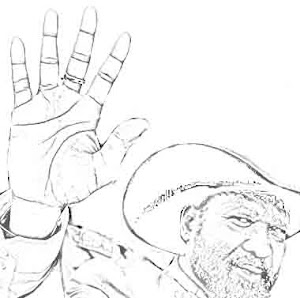 He has a capacity for leadership although impulsivity is one of his weaknesses. He is bold but can be rash, and when he takes decisions he may not think them through. He can act on impulse and can get a little carried away and in such circumstances, he may not be amenable to taking advice from anyone.
The good aspects of his character are that he is the type who is able to get along well with people and handle them with ease, or rather, control them with ease. He is able to get his way without seeming to. He is people-oriented. And also quite confident, almost daring.

His quality of self-confidence and self-reliance helps him greatly in leading others. He is a very independent and original thinker, and thus will always be a leader, not a follower.
His highly individualistic and unique nature shows fearlessness in taking decisions and he is not hampered by what others think.  Often, this unwillingness to heed advise is not always present. Kiir is not unreasonable, he is able to listen to others. And he is not a selfish man. He has the interest of his people on his mind. He can be quite open-minded when he stops to think, and there is strong desire to help others. He values independence and freedom (of speech, action, life) not just for himself - he values it as a principle.

Also, despite his determination and ability to control others, he is not adamant or stubborn. His wonderful quality of imagination and liberal thinking is enhanced by the fact that he lacks a huge ego. This means he is flexible and can back down when he deems it fit.
He has a melancholy and moody side to him, however.

Make no mistake, where his principles are concerned he does not like to compromise. This can be a weakness as at times because he tends to be impulsive. Also, at times he can see the details of an issue all too clearly, but miss the bigger picture, but yes he does have vision.

Materialism is shown on his hand only initially, as it reduces significantly as he grows older.

He does not score very highly on administrative ability because of his impressionability and impulsivity. This weakness can be offset if he chooses the right people to govern for him. He has to be very wary of whom to trust as there are signs that he can trust the wrong people. To sum up one can say that he certainly is a visionary, that too of a unique kind and an original thinker.

Hand Readings of other African leaders:  Nelson Mandela's hand reading or Muammar Gaddafi Hand Reading or Idi Amin's hand reveals his lack of reasoning powers or Jacob Zuma's hand analysis or read about the Heads of State of different countries around the world.