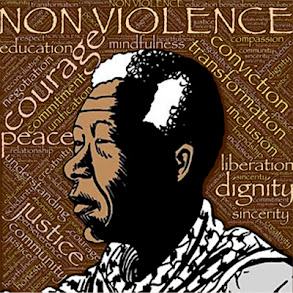 When one sees the hand of a legendary figure like Nelson Mandela, one expects his hand to be a certain way. Knowing him to be a humanitarian, a great leader, and someone who stood steadfast during his years of incarceration by the apartheid government of South Africa, I was sure I would find a large thumb, broad hand, deep lines and a developed Upper Mars. I did find these signs, but I found more, some of which was a little surprising.

The Headline on his right active hand is weaker than on
his left passive hand. (A link to a photo of right active hand here and for the left passive check here). This indicates that Mandela was born with a good intellect and concentration although his heart was always a little stronger than the head. As he grew older, however, the tendency of the heart to lead was enhanced. His emotions and feelings dominated his persona. The developed mounts, strong heartline and the shape of his fingers clearly point to someone who is emotional and allows his heart to make decisions.

He has a long, broad thumb, a broad palm which is likely to be slightly spatulate, well-developed mounts, particularly that of Venus, Moon, Jupiter and Lower Mars, long first phalanges, and strong lines of heart and life. Some of these signs can mean a slight imbalance of personality which can lead to wrong decision-making and that would be the case for most people. However, his hand also show that he is very large-hearted, compassionate and righteous without a shred of materialism in his personality. Plus, his broad and unselfish outlook on life and original, creative thinking shows his understanding of issues without thinking of narrow interests.

His hands also show that he is a man with a cause and even though his heart dominates, he is an intellectual, with an ability to think. The qualities of honour and idealism are present and combined with high thinking it can result in someone with strong beliefs. His heart would definitely create a situation where no one would be able to reason with him when it comes to beliefs. It shows a person who can go to extremes as we know he was willing to die for his cause. It's the first time I am getting to study the hand of a martyr, a true one. A person who will never compromise on his ideals, and no amount of reasoning can work.

It can mean of course that he may not be easy to get along personally, but as his hand also shows humility, it can counterbalance his idealism and strong passionate feelings. Humility along with idealism is a great combination and this too would set him apart from the average idealistic person. He can be idealistic and righteous without being arrogant, and this points to superior leadership qualities. The quality of righteousness (in the hands of some other famous people which I have seen) is usually accompanied with some level of arrogance, but this is not the case with Mandela. Righteousness exists without hypocrisy, and without ego.

Another unusual characteristic is that his hand does not show him to be controlling or manipulative in any way. Again, a rare quality in a leader. Today, almost all leaders have this trait. Perhaps they wouldn't get where they are without these traits!

If his ideals made him spend 27 years in prison, it was Mandela's mental strength and stubbornness which enabled him to survive. Perhaps it was his prison experience which changed him, made him into a more emotional man, a man who relied on his heart and soul to show him the way.

Another trait of his which could make him a difficult man to live with would be his tendency to be entirely without pretence or diplomacy, almost brutally frank and direct. That, and the fact that it was the heart which dictates.

Overall, the hand of Nelson Mandela is the hand of an unusual human being. His idealism could have thrown any other off-balance, but these qualities have done him and others a great good.

Related Reading: Hand Readings of other African leaders: Muammar Gaddafi Hand Reading or Idi Amin's hand reveals his lack of reasoning powers or Jacob Zuma's hand analysis or read about the Heads of State of different countries around the world.

(Above Image by John Hain from Pixabay)