Jacob Zuma’s hands tell us why he became the President of South Africa. He is far more than just a capable man - he is a master strategist!

In some ways, Zuma’s hands are very well balanced. Hands and fingers and palm are well shaped, fingertips square, with the Apollo (ring) fingertip likely to be spatulate. The thumb is good, in the sense that it is long with a good balance of its first and second phalanges, although the second phalange is thick.
This indicates a person with an overall balance of personality, a broad outlook on life, common sense, and a doer mentality. There are other important indicators of his personality shown his hand, like 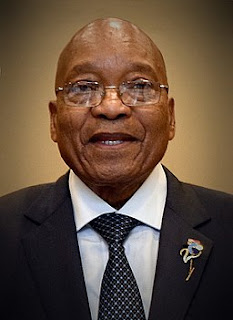 the headline for example. The headline tends to be the most important line on the hand. The line is separated from his lifeline quite distinctly and then it curves down in a bow shape and just about enters the Moon mount. This also increases the size of the quadrangle (space between the head and heart lines) in the latter one-third of its length but before that, the quadrangle is narrow. The heartline is curved and does not reach the Jupiter mount, and the Lower Moon and Jupiter mounts are well developed along with the Mercury mount (the mount below the little finger).
The fingertips are squarish, although the Jupiter (index) fingertip is slightly conic. The Jupiter finger is also a little short and a little bent as well. As the Jupiter finger is short, the Apollo (ring) finger becomes the dominant finger. The Mercury or the little finger is also a little bent although it is a good length relative to the other fingers. The first and second phalanges of his fingers are generally long, the third phalanges are slightly thick, and the Upper Mars mount is also developed to some extent.
Check out his hand photograph here.
Sensualism and the love of the good life are shown in his hand but this by itself is not a bad sign. Many people have this in their character but in Zuma's case, self-control is not present. Without self-control one tends to give in to one's impulses. In addition, his hand shows that he is rather bold, and at times thoughtless, and tends to take action without listening to advice. This is a little odd because his personality shows that he is not that self-confident. Deep in his heart, there could be feelings of some inferiority.
Also, despite the strong physical and sensual side to his personality, his hand shows an inner coldness of nature. Also, he is not a people person. An odd fit for politics. He does, however, possess a certain astuteness or shrewdness that allows him to get around people. It is said his personality shows charisma, but the hand does not really show this. What the hand shows is that he has an attractive personality, outgoing, bold and outwardly confident, but it falls short of real charisma and there is a lack of true leadership qualities.
He also does not possess the deep love, passion and force of personality that goes into making a person truly charismatic.
Zuma has a good understanding of money. And he has a desire for fame and wealth as well. His imagination and restlessness take the edge away from his material side, to some extent. It is difficult to say what exactly he believes in, but his beliefs are of a practical nature, not the religious kind.

Jacob Zuma is the kind of man who likes to plan his moves and is a good strategist and can be a master manipulator. He is an independent thinker and will not go with the herd. However, the downside is that he is not an easy man to convince, and can dig his heels in. In fact, in the earlier part of his life, he is likely to have had rather narrow views and a reluctance to accept other points of view. This gradually changes as he grows older, into his sixties and beyond.


Hand Readings of other African leaders like Nelson Mandela's hand reading or Muammar Gaddafi Hand Reading or Idi Amin's hand reveals his lack of reasoning powers or read about the Heads of State of different countries around the world.

(Photo credits:Australian Embassy Jakarta, CC BY 2.0
Posted by Nita at 7:02 AM