It is believed that Sreesanth the cricketer succumbed to temptation when he fell prey to bookies. That he was a "weak" personality. The weakness of character appears to be a widely held belief, mainly because of his known outbursts on the cricket field.

Actually, Sreeshanth's hand reveals a far more complex mindset. He has a
normal thumb with a good balance of both phalanges, a good hand shape (broad with 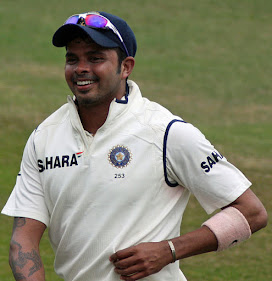 a good finger length and slim fingers) and a long, deep headline which balances well the heartline. This shows that Sreesanth is a smart and capable man with the ability to plan and get into the details. He has sufficient willpower, the ability to focus, and the ability to make decisions. He cannot be called weak. Check out a hand photo of his here.
Some of his fingers are bent however and mounts well developed, perhaps too high. The Jupiter (index) finger seems a little short.

The hand show that it was not exactly weakness of character that got Sreesanth into trouble with the police. So, what was it? The explanation lies in Sreesanth's very long Apollo or Sun finger. As discussed in this post here, a slightly long Sun finger can be a positive sign, pointing to a person with an above-average risk-taking ability and a high degree of competitiveness. Such people also tend to possess an optimistic outlook and are seekers of wealth, leadership and success. They often have a nose for business if confirmed elsewhere on the hand. However, this applies to a slightly long Sun finger, and if the rest of the hand is good.

Sreesanth's Sun finger is far too long, quite out of sync with the rest of the fingers, which means he possesses a significantly disproportionate amount of the qualities mentioned above. His hand does not show the wisdom or the self-pride to keep these qualities in check. Any character trait in excess can result in seemingly irrational behaviour unless alleviated by other qualities, or controlled and directed by very strong willpower. This is not the case with Sreesanth.

His hand shows materialism and a desire for wealth and fame. In addition, there is a tendency towards envy, a desire for attention, and also significant cynicism. While being a cynic by itself does not make a person behave irrationally, the quality of cynicism if allowed to take hold makes it easier for people to rationalise their actions. Cynics tend to have a slightly scornful attitude towards others, and a belief that people are inherently selfish and/or without ideals. The attitude is "everybody is doing it so what is the big deal."

However, finally why people behave the way they do is not an easy question to answer as it is usually because of an interaction of complex personality traits and the environment.

Related posts: Mahendra Singh Dhoni 's hand reading or  Sachin Tendulkar's hands tell us who he is or Saurav Ganguly's hands reveal the secret of his success or Shane Warne's hands match his reputation! or Rahul Dravid's hand reading or Pakistan's Imran Khan,  or just click on the label "Cricket"
(Free photo of Sreesanth from the wiki by Harrias / CC BY-SA [https://creativecommons.org/licenses/by-sa/3.0])