In my opinion, the qualities of objectivity, detachment, idealism, and asceticism are important aspects of a true spiritual leader. Nirmala Devi's hands show that there are all kinds of spiritual leaders, even the practical types, just as there are business types such as Baba Ramdev.
The shape of Nirmala Devi's hand is normal in the sense the fingers are of medium length, and the palm is neither too broad nor too long. The mounts are developed, particularly that of Jupiter and Moon and Mars to some extent. Venus is underdeveloped and restricted by the lifeline. Her hands are clear and medium length. The headline is high and rather straight. The third phalanges of her fingers are thick and long. The Apollo (ring) and Jupiter (index) fingers are fairly strong. The thumb is likely to be high-set.
See pictures of Mataji's hands here. 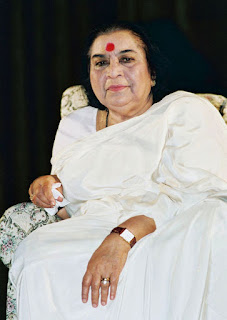 The hand does not show philosophical thinking which is odd if one considers her vocation. In contrast, gurus like Osho Rajneesh had extraordinary insight even if they had much less integrity.

Another drawback is that although Nirmala Devi's hands show a helpful nature, there is evidence of an inherent coldness. A deep-seated love for humanity is not seen in her hands; nor is warmth and or unselfishness. This is in contrast to the hands of say, Sri Sri Ravi Shankar. However, Mataji's hands also show that in the latter half of her life she became less cold and reaches out to people more than she did earlier although her inherent nature does not change.

Check out a post that discusses the differences between the gurus of old and the modern gurus: The hands of Swami Sivananda Saraswati of Rishikesh and Swami Chidananda