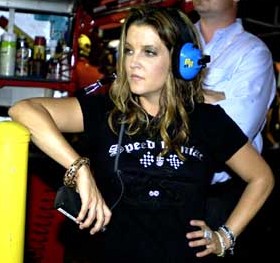 Lisa Marie Presley's personality was quite a complex one as was her relationship with Michael Jackson, to whom she was briefly married. She had talked about her split with him on the Oprah Winfrey show (originally aired in October 2010). Lisa claimed that Michael pushed her away, built a wall of sycophants around himself and she had no place in his life. She also that he was a very manipulative person. This is likely to be true as it can be seen in his hands. But at the same time, Michael Jackson was very vulnerable, very sensitive, and a lost soul.

It seems strange this Lisa Marie did not see this. She was married to him and was supposed to know him better than anyone else. I could not help but think that the whole picture was not being given.

Clear photographs of Lisa Marie Presley’s hands are unavailable on the internet, but one can see that she had a bent Jupiter (index) finger, a low-set Mercury (little) finger, well-developed mounts and a very very supple thumb with a slightly thick, long will phalange. The base of her hands was also developed, and the Moon mount was prominent. She also had a broad palm and square-tipped fingers and a low-set thumb.
Some of these signs show extreme impulsivity of character, stubbornness, difficulty with relationships and also a manipulative nature. She was probably as manipulative as Michael Jackson, if not more. She was also moody and imaginative, and also quite wilful and stubborn. She would want her way at all costs.

Check out a hand photograph of her hand here.

At the same time, she was extraordinarily compassionate and broad-minded – a liberal-thinking, kind and warm personality. She had a philanthropic nature. She was a true humanitarian, according to her hands. She had a big heart and was forgiving as well. She basically liked people. There was absolutely not a shred of vindictiveness in her character. All in all, a very decent human being.
But human beings are complex creatures and are often a mix of conflicting personality traits. Unfortunately, I had to rely on just a few photographs of her hand so it is difficult to say anything about her with as much accuracy as I would like. But overall, her hands show her to be a very kind, person, a free soul who would want good for others.

Michael’s hands show him to be stubborn, unreasonable at times, and very independent, so much so that he would not allow himself to be controlled, not even by those he loved. He was extraordinarily sensitive. Perhaps Lisa Marie did not understand him. If she had believed that she could control him, it would have been a big mistake on her part. Her impulsivity must have led her to marry him.

Related Reading: Michael Jackson's hands reveal his strengths and weaknesses or The hand analysis of music star Maddona and other celebs like Beyoncé Knowles or Rihanna or Oprah Winfrey.

Or check out the hand analysis of many other Hollywood actors, both male and female.
(This post has been edited in 2022)
(The photo published in this post is a free photo from the wiki)