Rahul Dravid is known as “the wall” for his enormous resistance or staying power. Is this quality present on his hand? Generally speaking, the “resistance” that people have can be due to several overt reasons – strong willpower and determination, a cool head and inner mental strength. In Dravid’s case, it is more to do with his extraordinary willpower and a cool head and less to do with mental strength. 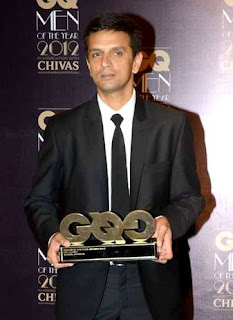 Strong willpower and a cool head is a formidable combination. In Rahul, these qualities are present not in average amounts, but in great amounts.
The length of Dravid's thumb, the size and shape of his hand, the square tips of his fingers, and a long balanced headline all contribute to this. There is no doubt that Rahul can push himself to an extreme degree. His self-control is just about amazing.
He has a largish hand, a very broad palm, long fingers and a perfect balance of the phalanges of the thumb (the Will and Logic phalanges). His Venus mount is well developed even if the Mars mounts are not very developed, particularly Lower Mars. The mounts of Moon, Jupiter are well developed too. He has a good finger of Saturn (middle finger) and the first and second phalanges of his fingers are long. His lines are long as well.
Check out a photo of his hand here and here.

His intensity and ambitious nature further strengthen his willpower and focus. All his fingers are long and well-shaped, giving him an added balance of personality. The headline and lifeline are good, as is the heartline.

His capability cannot be underestimated. Not only is he smart and capable, but he also has a broad perspective on issues, has the ability to think as well as an ability to plan. He is also a warm person at heart and likes people. His hand show a marked shrewdness, diplomacy, and an understanding of people. He can be a smooth talker. He also has organizational ability and the ability to get things done. All these qualities indicate that Rahul Dravid has the ability to lead a team. But when he was in his prime he did not reach his potential. One wonders why.

There could be several reasons for this. Perhaps it is his lack of boldness and aggressiveness as well as some cautiousness that prevented him from making a mark as a captain of a team. Taking risks and making bold decisions is a part and parcel of the job of a captain and Dravid loses out here. Also, he is not too pushy and may not be able to push others, and maybe some amount of timidity is present. His hand also reveals some element of cynicism and insecurity when it comes to the success of others. Without a closer look at the lines of his hand, I cannot comment further on this aspect of his character.

The developed mounts of Rahul’s palm are his Jupiter, Moon and Venus. The characteristics of these mounts form the basis of his personality.

When it comes to inner mental strength, it is not as if Rahul lacks it, but when one compares the strength of this quality to some of his other qualities, then it seems he needs more of it. Every personality characteristic needs to be seen in perspective.  To balance out the other strong aspects of his character he needs more aggression and resistance. For the kind of success he aims for, the kind of position Dravid has reached, particularly in the sports arena where there are ups and downs, mental strength is what keeps a person’s confidence up. Mental strength is primarily about fighting qualities and these are likely not sufficiently developed in Dravid's hand.

Reading anyone's personality is a complex and difficult task, as people have many layers. However if one has to sum up his personality one can say that he has formidable determination and self-control, almost super-human at times.

Related Reading: Sachin Tendulkar's hands tell us who he is or Saurav Ganguly's hands reveal the secret of his success or check out the label Sports Stars
Posted by Nita at 1:43 PM