All great sportsmen are strategists. Some are better than others, and Rafael Nadal’s hands show that he is one of the better ones, even better than Roger Federer. True, he does not plan as much, nor does he go that much into detail, but Nadal’s hands show unusual shrewdness. More importantly, he can think and act quickly. He is flexible, takes instant decisions, and that too almost intuitively.

Rafael or Rafa as he is popularly known, like many successful sportspeople, has an excellent shape to his hand – broad palm and long fingers but not excessively long. His pinky or little finger is relatively very long and a little bent. His other fingers are fairly straight and the Jupiter or index finger is conically tipped and leaning outwards. He had a very good Apollo (ring) finger, excellent Venus and Jupiter mounts and Upper Mars and the Mercury mount are also fairly developed. In addition, he has a long, low-set thumb and dark, curved lines with the head and life joint for quite a bit.

His hand shows that he is not just mentally dexterous, he can be amazingly skilful, crafty, active and nimble and these are the qualities of people with a good
Mercury mount and finger. Intense activity is the hallmark. 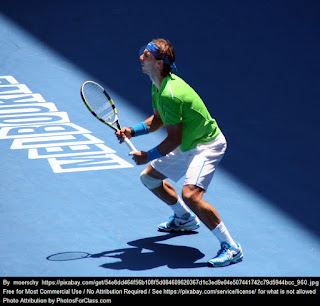 Check out his hand photograph here and here. The one on the right is a free photo from Pixabay.

Nadal is a cautious person, sensitive, idealistic and not always hard-headed and logical. He can be a little secretive.

Rafael Nadal is different from Roger Federer in the sense that he is inwardly calm and strong and this enables him to make the right decisions with a cool head, all the while keeping his cards close to his chest. This also makes him a dangerous opponent.

As he is quick, both mentally and physically, thinking on his feet, it is not difficult for him to outwit his opponent. However, Rafa is not as aggressive as some other tennis players, certainly not as aggressive as Federer, but he doesn’t really need to be. He has his own game plan, which is usually flexible and often spontaneous.

A very decent guy
This is not to say that Rafael Nadal isn’t a gentleman. He is a refined person, kind-hearted, and probably witty and charming. He has a philanthropic heart and a very generous one. The hand cannot actually show actions of a philanthropic kind because even those without philanthropy in their hearts can do these actions. The hand just shows the heart and Nadal has a free-spirited, liberal and generous nature.

Individualistic and strong
He is an individualist thinker, partly because he tends to think out of the box and does not follow the herd. Moreover, he does what he likes, and at times breaks the rules of society. But he does what he feels is right.

Strong will power and determination, persistence and stubbornness is shown on his hand, far above average. He isn't the type to give up easily.

What is it that drives him?
It's certainly not money. He is too idealistic, at times quite righteous which is not contradicted by any other sign. He wants to always do the right thing, and can be critical and judgmental of those whose behaviour he doesn't approve of. He has high moral standards and could become quite self-critical. He has to be careful that he doesn't become a hypocrite because it's not easy to reach these standards.

He values excellence. Although he has good self-esteem, he genuinely feels that to be the best he needs to keep learning. He has his heroes and looks up to them. He will be critical of himself because he wants to improve. He is far-sighted and prudent in this regard.

As much as he enjoys the comforts of life, money itself is not something he wants intensely.

Other qualities
His fingers show that he is not consumed with neatness in his physical surroundings and may not always take care of his appearance. He is too engrossed in his daily tasks and finds these aspects of life cumbersome. He is likely to be a fun-loving guy, who likes beautiful things.

Overall Rafa Nadal is not the kind of person you can take lightly. He always has something up his sleeve. And more than anything, he is likely to be a gem of a person in real life.

Related Reading: Find out what makes Roger Federer tick by reading his hand analysis. If you like football stars, you can read about Cristiano Ronaldo, and if you like cricket stars here is the hand analysis of Sachin Tendulkar and Saurav Ganguly.
Or perhaps you want to know if your favourite sportsperson is represented on this blog. For that check out the hand readings of all sports people on this blog: Sports Stars.