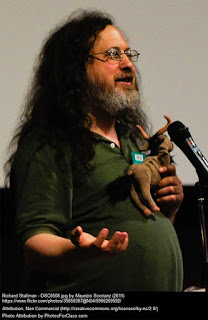 People hold extreme views for a variety of reasons and palmistry can reveal why they think that way. People are often suspicious of radicals, especially of their motives. Are these people genuine or simply trying to attract attention or manipulating the public in some manner? Are they kooks of some kind? The hands can unmask a person's character quite well.

The dominant aspects of Richard Stallman's hands are the well-developed mounts of Moon and Venus, although Moon appears to be stronger. These developed mounts overshadow other mounts considerably, and this can create a lack of balance. The Saturn (middle) finger is a
little bent too and the heartline, though long is low-set and the first phalanges are long and the slightly short fingers have conic tips. He has a long thumb, a little thick, held a little close to the hand. The lines are not as deep as they should be for the size of his palm.

All these signs mean an imagination developed to an intense degree, along with cynicism, although he does care about people.
However, it can mean over-sensitiveness and when combined with a strongly developed imagination, it does not bode well. Such people, because of their imagination, could get hurt over minor slights, not because they have a big ego, but because they believe they are being attacked. They tend to see things from their own perspective and they are basically loners at heart. Their imagination can also increase their sense of dissatisfaction with life, and being suspicious of people is often the result. Such people tend to stir things up, but they are not evil.
Take a look at Stallman's hand here and here.

(Richard Stallman is an American software freedom activist and the founder of free software. The photo published above is a free photo.)

The flip side of Richard Stallman's persona is that he is ruled by the head and is likely to feel acutely for the underdog. However, Stallman’s compassion is more cold than warm. He is not a Mother Teresa because his compassion is more conceptual and intellectual, rather than it being true warmth. Idealism and self-righteousness are present in good amounts. So there is no doubt that Stallman is genuine, with a real concern for those whom he believes are being exploited. That is where it all stems from.

He is also a doer; determined and action-oriented but there isn't a strong enough outlet for his strong creative mental energy/talent and restlessness, and this again affects the balance of personality. Diplomacy is not his strong point.

Stallman is straightforward and honest, but he is not above manipulation. He is however not an open person and this is a trait that does not sit well with any social activist.

Take a peep into the personalities of people like Julian Assange or Bill Gates, Steve Jobs, or Warren Buffet or Martin Luther King Jr or a range of interesting people whose hands have been read on this blog like Nelson Mandela. Just search for your favourite famous person! Press that Search button!
Or check out the hand readings of other Social Activists.