Sachin Tendulkar's hands tell us who he is 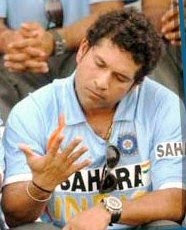 Sachin Tendulkar and Cristiano Ronaldo are two successful sportsmen, both stars in their own right, but their temperaments couldn’t be more different. True, both men are simple at heart, but Sachin is more so.

It is interesting to see how the hand corroborates Sachin's “known” character traits, although this post might reveal some additional aspects of his persona. It could also explain why Sachin is the way he is. In other words, what makes him tick.


A few days ago on television, Sachin said something he has said several times in the past. That money is not that important to him, that it is his passion for the game and love for India which drives him. But we will still examine his hand to check whether a love for money is shown on his hand.

Sachin Tendulkar hand's show a broad palm with very pronounced mounts of lower Mars, Venus and upper Moon. The upper Mars and Jupiter mounts are also developed. The lines visible on his hand are the main lines only – that of Life, Head, Heart and Fate and the latter is not very clear from the photographs. Not too many minor lines are seen on the hand. The main lines are not very long, and the headline is fairly straight, although it is sloping on the left hand, but it does not go across the hand. The fingers, with rounded tips, are an interesting bunch. Only the Apollo (ring) and Saturn (middle) fingers seem to be normal. By normal I mean, normally set (neither too high-set or low-set) and of a good length. The first phalanges are good and the second a little short. The thumb is good too, low-set and a decent length, and it is supple as well.

It's quite clear that being rich is not what drives Sachin. Money does matter to him, but his beliefs and ideals matter more. Besides, money-making ability is not seen on his hand, in the sense, that he does not have business ability. If he has made money, it is by the sheer force of his talent. Interestingly, his hand shows a very high level of mental talent. Clearly, his mind always played a huge part in his success. Sachin is not just about physical skill. The limited length and thickness of his lower phalanges overall show a person who has simple tastes and can lead a frugal life, if he wishes to.

The shape of his hand shows a practical, down to earth person, and this means that money would be important to a certain extent, but only as much as would be required for a comfortable life and secure future. Greed doesn't figure in his hand.


Sachin has played consistently over twenty years in international cricket and has now made it clear that his intention is to play for India in the World Cup in 2011. Some people might feel he is too old, being in the late thirties by then. Looking at it objectively, from the point of view of a palmist, I would say that if anyone can do it, it’s Sachin Tendulkar. It is not for nothing that he has lasted for so long. His hand shows resilience and resistance, a good amount of resistance to adversity, and also a mental strength and calmness that enables him to remain steadfast and gives him the ability to stand his ground. This is a quality essential for long-term success because talent is never enough. Sure, Sachin is talented, but what is important is that he able to sustain himself, unlike a lot of other talented superstars. This quality is what makes any star eternal. Aggression is also pronounced on his hand, a great sign on a sportsman's hand. Aggression, a superior talent and staying power – qualities that very sportsman needs to succeed. Sachin Tendulkar has all of these.

Determination is also present, and this adds to the strength of his personality. This is probably what makes him disciplined. Although he has all these qualities, reasoning abilities and a pragmatic attitude are an asset and can help him get over any weaknesses that he perceives in himself. And that brings us to another aspect of his personality. He is not egoistic and is likely to be aware of his own faults. He would take a practical view of them and try to improve himself. In fact, some insecurities about himself are present although it is difficult to see why he should not be supremely confident about himself. Perhaps this insecurity is what pushes him to achieve greatness. He inherited this quality. Luckily, despite the insecurities, failure is not a stumbling block for him. He has the ability to push on and is not the type to get easily discouraged.

He could be a little too aggressive and impulsive on occasion, and he could have some difficulty in trusting people. At heart, he is a cautious person but impulsiveness is present. His hand shows that aggressiveness is a quality that he has kept in check, and it is seen as reduced on his active hand.

One wonders why he gave up his captaincy when it was handed over to him on a platter. Although Sachin has the ambition to lead, it is not an overriding desire. Like he said, he is more interested in perfecting his talent (his game), and besides, there is the issue of diffidence which can come in the way of what he sees as "lording" it over others. He may not feel confident about his leadership skills, although he is a compassionate person who wants to do good by others. He is not a selfish man. But he is not such a great judge of character and this would come in the way of his leadership ability.

Communication ability is average although it has improved over the years, to some extent. Although Sachin can be shrewd and is not as straightforward as he appears, he lacks the ability to manipulate and control others.

If Sachin had decided early on that this is what he wanted, being India’s best Captain, he could have done it. If he had wanted the power and the money he would have worked towards it. He has the mental strength and flexibility to adapt, and he has the ability to push himself. In fact, his hands show that many of his fixed ideas have changed over time. But his goal has always been his game. The mental aspect of it. That dominates.

Sachin Tendulkar is also quite the serious guy, but he has the ability to enjoy himself and is basically a happy person. He has good taste but he prefers useful things around him rather than just “arty” stuff.

Overall Sachin is a reserved person and not arrogant or egoistic. He would make a good, thoughtful husband. He has warmth of personality but he is not an over-emotional type of person.


Note: Primarily, it was Sachin Tendulkar’s left hand which was taken into consideration for the hand reading as his left hand shows his current state of mind as he writes with his left hand.

Read about other famous Indian cricketers like :
Saurav Ganguly or Virat Kohli or Pakistan's Imran Khan, or Australia's Shane Warne
And also check out the hand readings of other Sports Stars from around the world.

(The photo is from Bollywoodsargam which has free images of Sachin)