Swami Prabhupada* was a spiritual teacher and was the founder of ISKCON (International Society of Krishna Consciousness) and like many of his kind has inspired millions of people. Yet, despite the reams of material written about spiritual leaders and their life and death, one always wants to be sure of their genuineness. The hands are a useful tool to help figure this out.

The Swami has a large hand, with long, clear lines, more or less straight fingers which are neither short nor long. His head and heart lines are balanced with each other. The lifeline is strong, and the palm, though rectangular in shape, is big, and not narrow. He also has large nails, pronounced knots, and good first phalanges. His thumb seems to be a little low set, even if held close to the hand.

These hand features tell us that Swami Prabhupada was clear-headed, and 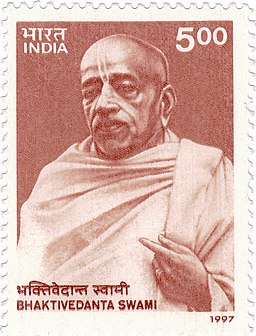 a thinker, an intellectual, with a philosophical bent of mind. His hands show remarkable cool-headedness. He must have been someone fully in control of his emotions, like a true ascetic, and someone grounded, with tremendous energy, and an immense ability to cope. These energy levels must have been sustained even in later years. Perhaps that is why he was known to be quite charismatic.

(You can check out his hand photos here and here. The photo on the left is a free-to-use photo from India Post.)

Most importantly, his hands show compassion and the desire to help others. When a good mind, a calm, strong, balanced personality, and energy is combined with a strong desire to help others, such people have the potential to do a lot of good in their lives. In the case of Swami Prabhupada, we all know he did. He founded ISCON, like a true leader.

His hands do not show a desire for wealth.

A slightly shy, introverted nature is shown, but this would be more evident in his younger days. His hand shows humility and trust. His hands did not spring any surprises. They just confirmed that he was truly a spiritual man.

You might want to read about the difference between modern gurus and the gurus of yesteryear, as revealed by the hands.

You can also find on this website, the hand readings of spiritual leaders from all over the world: including the Pope, the Ayatollah, the Dalai Lama, Mother Theresa and also Mahatma Gandhi.

Or scroll through the posts tagged Spiritual Leaders whose hands have been read on this website.

*Swami Prabhupada’s full name was Abhay Charanaravinda Bhaktivedanta. The  ISKCON movement which he founded is also known as the "Hare Krishna Movement." He is considered a messenger of Krishna by his followers.